For Kids That Struggle With Vocabulary, Bedtime Is the Ideal Time to Learn New Words

A new study shows that ‘sleeping on it’ can improve children’s ability to memorize new words, particularly for those with poor vocabulary skills. 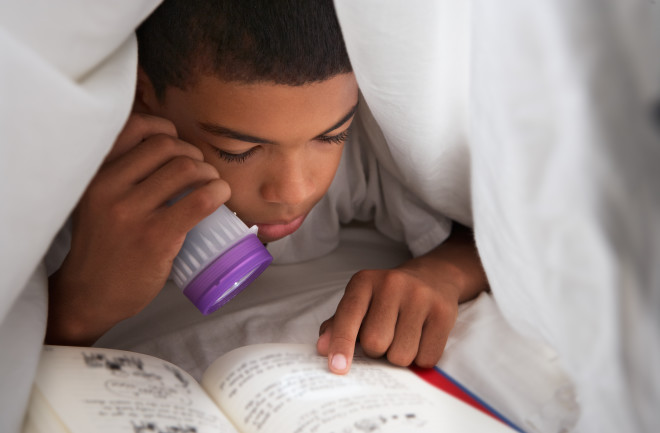 Parents and caretakers diving into homeschooling this week might be learning just how hard teaching can be. For those trying to boost their child’s vocabulary, there’s one method that might help the cause: Let your kid sleep on it.

New research in the journal Royal Society Open Science suggests that kids in grade school with somewhat poor vocabulary could have a better chance of remembering new words if they learn them in the evening, close to bedtime.

One way researchers gauge how well someone has learned a new term is by whether they confuse it with a similar-sounding word. “When we are listening to or reading words, multiple candidate words become activated simultaneously,” Lisa Henderson, a psychologist with the University of York and study co-author, said in an email. “If we hear ‘Brexit,’ we might also fleetingly activate ‘breakfast.’ ” If someone has to figure out which of the words they actually heard, that means they’ve become accustomed to the new vocabulary. This juggling of new terms normally doesn’t happen until someone has gotten a good night’s sleep, Henderson says.

Henderson and her team wanted to know how close to bedtime the learning had to be in order for the sleep to be helpful. So the team used this potential-confusion test to see how well kids ages 8 to 12 remembered new vocabulary. The list of new words kids learned were made up — like “banara.” That way, the participants were learning words they had never heard before and were very similar-sounding to real works they already knew (in this case, banana.) Some kids learned the new words in the morning, while others learned them around dinnertime.

The morning after learning the new words, the kids sat down for memory tests. One, for example, provided some of the new word’s letters, like B _ _ _ _ A. Henderson and her team looked to see how long it took for kids to fill in the gaps. If “banara” was more firmly lodged in their memory, it would take longer for the test takers to decide what letters to put down. This may seem counter-intuitive that the slower test-takers had the better vocabulary. But too fast of an answer meant the word hadn't actually been incorporated into the kid's lexicon.

The Value of a Good Night’s Sleep

As for why this is, Henderson and her team aren’t sure, but they’re working on figuring it out. One possible reason is that those with poorer vocab skills form weaker memories of the terms in the first place. “Sleeping closer to learning might help to rescue those more fragile memories,” Henderson says.

Though preliminary, the results of this research indicate to the team that bedtime stories might be a particularly fruitful opportunity to teach kids new words. The team is actually testing this with 5- to 7-year-old children right now, and having parents report the results.

If a bedtime read seems out of reach, Henderson points out that books with good vocabulary are still helpful no matter when they’re read. “Reading vocabulary-rich books is definitely beneficial at any time of day,” she says. “For developing language, literacy, accessing the broad educational curriculum, engaging in successful social interaction, the list goes on.”

More From Discover
Health
This Patch Measures Pains in the Neck (And Predicts Sports-Related Concussions)
Mind
The Well Sibling Syndrome and its Mental Health Impact
Health
The Blurred Line Between Lyme Disease and Mental Illness
Mind
5 Rare Mental Conditions You May Not Know About
Mind
Understanding the Flaws Behind the IQ Test
Health
The Placebo Effect: A Mystery in Potential Therapy
Recommendations From Our Store
My Science ShopDiscover STEM Kits
My Science ShopDiscover 2022 Calendar
My Science ShopStrange Science
My Science ShopElements Flashcards
Shop Now
Stay Curious
Join
Our List