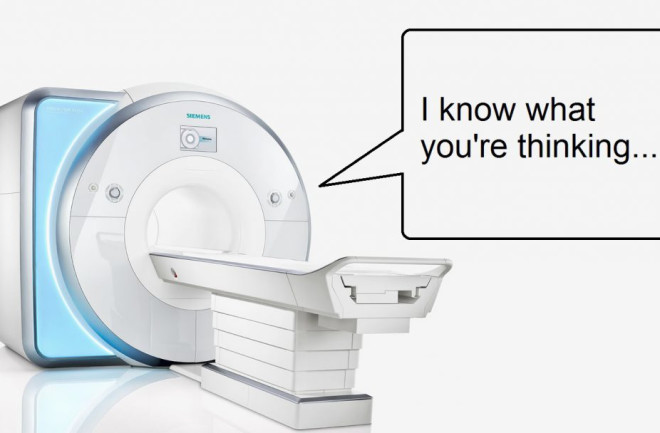 Having an MRI scan can be a noisy, unusual, and sometimes stressful experience. But can it also be a social one?

In a new paper, neuroscientists Benjamin O. Turner and colleagues ask whether telling people that their MRI scan will be a “mind reading” procedure is enough to alter brain activity through ‘implied social presence’. As the authors put it:

If people believe that a technology can ‘see’ their internal thoughts, will people alter what they think about?

In an elegant and clever experiment, Turner et al. gave each volunteer a series of fMRI scanning runs. All of the runs used the same resting-state functional MRI sequence, but they differed in how they were presented to the participants.

Some of the scans were (falsely) described as being structural scans which just measured brain anatomy, not activation. Others were described as a scan to ‘measure brain activity’, while the final set of scans were really talked-up, with experimenters emphasizing that this ‘mind-reading’ scan could track thoughts, including embarrassing ones, in real-time.

This is a nice experimental design – keeping the fMRI parameters the same and just changing how the scans were explained to the participants.

So what happened? Well, it’s complicated: Turner et al. report no statistically significant differences in brain functional connectivity between the ‘anatomical’ scans and either the ‘brain activity’ or ‘mind reading’ scans (in n=21 people).

Still, I think Turner et al. are onto something here. I have long thought that the mindset of participants and how they feel about being scanned is an under-studied topic. Studies comparing resting state activity between two groups of people (say, patients vs. healthy controls), in particular, might well be picking up differences in feelings-about-scanning rather than more general differences.