Feeling powerless is no fun. A lack of control can make the difference between contented and unhappy employees. But new research shows that a lack of power doesn't just make people feel disgruntled. It has a more fundamental effect on their mental skills. 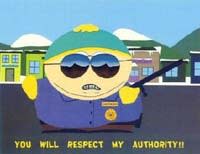 In a series of experiments, Pamela Smith from Radboud University Nijmegen has shown that the powerless actually take a measurable hit to important mental abilities. Even if people are subconsciously primed with the concept of being powerless, they perform more poorly at tasks designed to assess their ability to plan, focus on goals and ignore distractions.

According to previous research, a lack of power forces people to constantly re-evaluate their own goals and monitor more senior individuals. Without authority, a person's actions rely on instructions and may constantly change at the whim of their superiors, whose own motives and goals must be guessed at. Monkeys show similar behaviour. Studies have found that subordinate rhesus males follow the gaze of those with higher status, while dominant individuals only look in the same direction as others with greater standing.

Smith reasoned that this constant re-evaluation draws the brain's resources away from other needs, including a set of mental abilities known as "executive functions". The term is loosely defined but accurately named and refers to a set of master processes that govern and control more basic abilities, like attention and motor skills. They allow us to plan for the future, adapt to new situations and carry out our goals. They allow us to carry out actions that further our goals while restraining us from those that hamper them.

"I have the power"

Smith used a variety of psychological tests to investigate how power, or a lack of it, affects executive function. The first of these, a "two-back task", involved watching a sequence of letters flash by and saying if the current letter matched the one shown two cycles ago. The test requires people to continuously work out if new information is relevant to a set goal.

About 100 volunteers took the test and Smith split them into superiors and subordinates. All were told that they would do a practice run, then work together with the superiors in control. After the test, the subordinates would be paid according to evaluations from the superiors, who would themselves receive a fixed payment. In reality, the "practice run" was the real deal and as predicted, the subordinates made more errors than their powerful superiors. It was an interesting first result but didn't account for the possibility that the subordinates were just preoccupied with their impending evaluation.

The second experiment was subtler. No specific roles of authority were dished out. Instead, Smith subliminally influenced the participants' feelings of power by asking them to unscramble a set of innocuous sentences. The scrambled words either related to power (authority or dominate) or the lack of it (obey or subordinate). After this psychological "priming", the volunteers did a Stroop test, designed to ascertain their ability to suppress irrelevant responses that won't help them to achieve a goal.

The third experiment built on the skills needed in the previous tests and looked at the more complex executive ability of planning. Smith used the classic Tower of Hanoi game, where players have to move a pyramid of discs from one pole to another, one at a time, and without placing a larger disk atop a smaller one. The game isn't straightforward (try it yourself with at least 4 disks). The disks often have to be initially moved in the opposite direction to their final locations and this "sub-goal" conflicts with the bigger one of getting everything to the final place. Players have to be able to reconcile these competing priorities to make a workable strategy.

Again, they were primed beforehand with feelings of high or low power by writing about a time when they had control over someone or when someone had control over them. And again, the low-power group performed more poorly than the high-power one, taking more moves to shift the disks.

The poorer performances of the powerless groups were not for lack of trying. Smith administered a series of questionnaires after the tests in which all volunteers reported making the same amounts of effort and were equally motivated to successfully complete the tests.

The results have strong implications for both societies and businesses. The majority of us would want to avoid a world where social hierarchies are purely based on characteristics like gender or race. We would prefer to live in perfect meritocracies, where even people from disadvantaged groups can ascend to positions of power if they are talented high achievers.

But this mindset is perhaps too facile; if we assume that the powerful are swimming in skill or motivation, it follows that the powerless are lacking in both. That certainly wasn't the case in Smith's experiments. The volunteers were split into different groups randomly rather than based on known skills or talent. Despite this, they still showed more powerful executive functions if they experienced power, or even the mere concept of it.

These results suggest that poor performance of those that lack power does not provide sufficient evidence that power has been allocated fairly. An alternative explanation is that assigning someone a certain position can alter their mental skills in a way that confirms their standing. The powerful retain power because of the improved mental processes that it brings about, while impairments in the same processes keep people without power on the bottom rung. These effects make hierarchies incredibly stable, and lead the powerless into what Smith calls "a destiny of dispossession".

Power doesn't have to come through rank - it can also be assigned on a case-by-case basis. Delegating jobs to people isn't simply about telling them what to do; good managers will hand over not only tasks, but the authority to carry out those tasks. Employees tend to perform better if they have the ability to make their own decisions within certain confines, and take ownership of their own work. The alternative - peering over their shoulders and dictating their every move - is a sure-fire route to poor results.

The results are especially interesting for professions where stakes are high and errors can cost lives, such as medicine, or where critical events are rare and goals must be kept firmly in mind, such as security. In such situations, improving the executive functions of employees by awarding them greater self-sufficiency and authority seems to be a no-brainer.