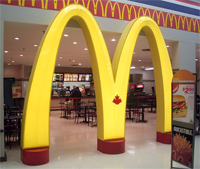 Like it or not, the golden arches of McDonalds are one of the most easily recognised icons of the modern world. The culture they represent is one of instant gratification and saved time, of ready-made food that can be bought cheaply and eaten immediately. Many studies have looked at the effects of these foods on our waistlines, but their symbols and brands are such a pervasive part of our lives that you'd expect them to influence the way we think too.

And so they do - Chen-Bo Zhong and Sanford DeVoe have found that fast food can actually induce haste and impatience, in ways that have nothing to do with eating. They showed that subliminal exposure to fast food symbols, such as McDonalds' golden arches, can actually increase people's reading speed. Just thinking about these foods can boost our preferences for time-saving goods and even nudge us towards financial decisions that value immediate gains over future returns. Fast food, it seems, is very appropriately named.

Zhong and DeVoe asked 57 students to stare at the centre of a computer screen while ignoring a stream of objects flashing past in the corners. For some of the students, these flashes included the logos of McDonald's, KFC, Subway, Taco Bell, Burger King and Wendy's, all appearing for just 12 milliseconds. We can't consciously recognise images that appear this quickly and, indeed, none of the students said that they saw anything other than blocks of colour.

The students were then asked to read out a 320-word description of Toronto and those who had subconsciously seen the fast food logos were faster. Even though they had no time limit, they whizzed through the text in just 70 seconds. The other students, who were shown blocks of colours in place of the logos, took a more leisurely 84 seconds.

Zhong and DeVoe also found that thoughts of fast food could sway students towards more efficient, time-saving products. They asked 91 students to complete a marketing survey by saying how much they wanted each of five product pairs. One option in each pair was more time-efficient (as rated by an independent panel of 54 people), such as 2-in-1 shampoo rather than regular shampoo or a four-slice toaster versus a one-slice one.

If the students had previously thought about the last time they ate at a fast food joint, they were more likely to prefer the time-saving products that students who had thought about their last visit to the grocery store. Zhong and DeVoe say that this supports their idea that thinking about fast-food makes people impatient. To me, this is the weakest part of their study, for products like 2-in-1 shampoo are as much about saving money (perhaps more so) as they are about saving time. Fast food is not only served quickly but priced cheaply, and it may be this aspect that altered the students' preference.

However, the duo addressed this issue in their third experiment. They randomly asked 58 students to judge one of four different logos on their aesthetic qualities, including those of McDonald's, KFC and two cheap diners. Later, they were told that they could either have $3 immediately or a larger sum in a week. They had to say how much it would take to make them delay their windfall.

As predicted, those who considered the fast food logos were more impatient, and demanded significantly more money to forego their smaller immediate payment in favour of a larger future one. It seems that they put a greater price on instant gratification over larger future returns

Of course, these results can't tell us if fast food actually contributes to a culture of impatience and hurry, or if it's just a symptom of it. Nor do they say anything about whether this effect is good or bad. That would all depend on context. As Zhong and DeVoe note, a brisk walking speed is a good thing if you're trying to get to a meeting but it would be a sign of impatience if you're aiming for a leisurely stroll in the park.

Their study does, however, suggest that fast food and the need to save time are inextricably linked in our minds so that even familiar brands can make us behave more hastily. They could even affect our economic decisions, harming our finances in the long run. As Zhong and DeVoe say, even our leisure activites are "experienced through the coloured glasses of impatience" and "it is possible that a fast food culture that extols saving time not only changes the way people eat, but also fundamentally alters the way they experience events".

More from the same group: