Have you ever seen a face on a football? In a new paper, neuroscientists Gerwin Schalk et al. report that brain stimulation caused a man to experience strange hallucinations. The patient saw faces in everyday objects, including an orange soccer ball and a featureless box. The researchers coined the word "facephenes" to refer to these face-like perceptions. Schalk et al. studied a 26 year old Japanese man suffering from intractable epilepsy. The patient was implanted with a large number of brain electrodes in order to pin down the source of his seizures. Crucially for Schalk et al., several of the electrodes lay on the fusiform face area (FFA). The FFA has been a focus of much research to determine whether it is - as the name suggests - a brain area devoted to the perception of faces. While there have been monkey studies previously, Schalk et al. say this is the first human study to focus on the how FFA stimulation affects the perception of non-face objects. 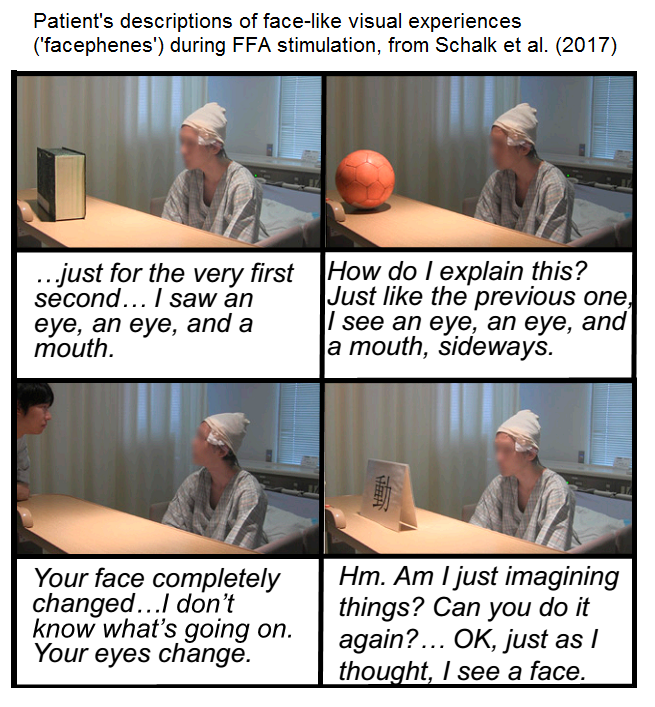 It turned out that stimulation of particular points within the left FFA evoked fleeting, face-like imagery that the patient stuggled to describe. The transcript of his running commentary on his experiences makes it clear how subtle the facephenes were:

Stimulation while looking at a Box: Patient: "It doesn’t change much. But for the first second, just for the very first second after it started I saw an eye, and eye, and a mouth for a bit but I started thinking 'what is this'? but the next thing I noticed was just looking at this box." Stimulation while looking at a Ball: Patient: "How do I explain this ... just like the previous one, I see an eye, an eye and a mouth, sideways.” Experimenter: "What kind of face was it?" Patient: "Just now? What's that cartoon character? ... Not sure what, but some sort of cartoon character."

When the FFA was stimulated while the patient was looking at the face of one of the experimenters, it caused a characteristically Japanese transformation:

Patient: Your facial expression changed. Experimenter: What changes? Patient: From your eyes to your mouth, your face kind of changes into an anime character.

This is a striking set of results. The main advance here is that Schalk et al. have shown that FFA stimulation is sufficient to evoke face perception. Previous studies had only shown it to be necessary, by showing that disrupting the FFA impairs face processing. Thus, the evidence that the FFA is causally involved in face perception grows stronger. Still, I suspect that the long debate over the function of this area isn't over. Then again, this isn't the first human FFA stimulation study. Back in 2012, Parvizi et al. carried out a study similar to Schalk et al.'s. They found that FFA stimulation disrupts and distorts face perception, but their patient didn't report facephenes. So why not? Schalk et al. don't really discuss the discrepency, saying only that Parvizi et al. "did not systematically test" the effects on non-face perception. Maybe only certain people see facephenes. One question I had about the results was this: did the patient experience the facephenes as being 'in' the objects, such that they became objects-with-faces? Or, alternatively, were the faces 'on' the objects - superimposed on them, but seperate from them? The patient's vague and halting description in the transcripts doesn't seem to distinguish between these two possibilities. Schalk et al., though, explicitly describe the facephenes as being "superimposed" on the real world, saying that the stimulation "added a face on top" of the objects. Perhaps it's a language issue: the transcript is translated from Japanese, so perhaps the original meaning makes it clear that the faces were distinct from the objects.