Evolution Could Explain Why Having a Girlfriend Makes Men More Attractive

Being in a relationship might make a man more attractive to women. 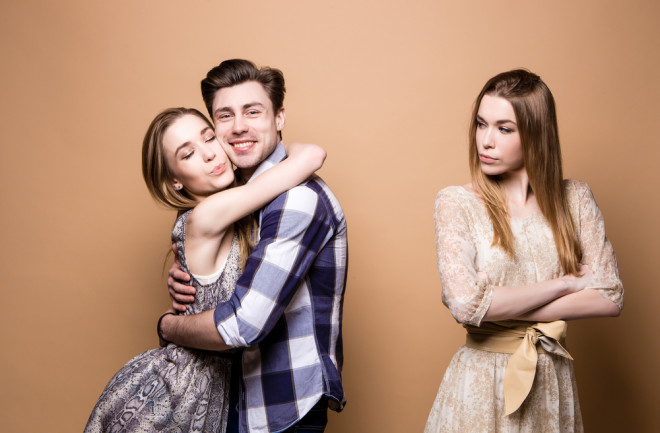 Here’s an option for men struggling to find female partners: Hire a professional wing woman for a night on the town. A beautiful, charismatic companion will help ease you into conversations with prospective dates. At least, that’s the claim companies touting the service make.

But there may be another hidden advantage to your female companion, one rooted deep in our minds. Women seeking romantic partners seem to prefer men already chosen by another lady. It’s a notion ingrained in pop psychology, but actually based on the scientific hypothesis that heterosexual women practice “mate choice copying.” That is, females save time and energy finding a worthy mate by selecting one previously picked by others.

Researchers have documented mate choice copying in animals from rodents to birds to fish. But whether humans do it is more ambiguous.

In theory, going after men who are taken has its benefits. Biologists predict mate choice copying to occur when reproduction requires a lot from one sex — such as pregnancy, lactation and parenting — but not necessarily anything from the other beyond, say, insemination. So, finding a high-quality mate is of greater consequence to the parent destined to rear the future offspring. For most vertebrate animals, that parent is female.

Females can try to assess male genes and paternal attributes based on physical or behavioral clues, like shiny coats or sexy mating dances. Or they can skip the search entirely and pick partners previously deemed mate-worthy by others.

For decades, biologists theorized that mate choice copying existed and observed it anecdotally. But the first direct evidence came from studies on guppy fish conducted in the 1990s.

Researchers allowed guppy gals to choose between males plopped in their tanks. Generally, they picked mates based on size, tail length and coloration — vibrant orange being the most favored. That was, until scientists added a Plexiglas partition permitting a fish to watch another pair’s courtship (in guppy love, females glide along as males shimmy, body arched in an S-shape). Afterwards, the observer female often selected the previously courted male, even if a brighter-orange fish was available. If a drab male was initially courted for a longer duration or by multiple females, his chances of being picked increased even more.

Mate choice copying has since been observed in other species, including quail, mice and damselfish. So how about us? Over the course of human evolution, it’s unclear how involved fathers have been in child rearing. Men probably invested more than guppy dads, but biologically, only had to offer sperm. A man (or proto-man) could have looked good superficially, but carried bad genes and bailed. If so, the female still had to raise that offspring carrying dad’s mediocre DNA. It would have been safer to pick a male who had already faced close scrutiny by another female.

But that scenario depends on family dynamics in our distant past — something greatly debated by researchers. The case for human mate copying isn’t solid.

Experiments to detect mate copying in humans generally go like this: Researchers ask participants to rate the attractiveness or desirability of a person shown in photos with or without an apparent romantic partner. Sometimes that partner’s allure is varied through digital manipulation or the use of several different models.

The majority of studies have tested heterosexual cisgender women’s impressions of men with female partners. Most test subjects have been undergraduates at Western universities — enrolled in psychology classes — as is true with much research in the field. So claims about humans in generalshould be viewed with caution until more data exists from people of diverse ages, cultures, education levels, gender identities and sexual orientations.

But the data we do have suggest that being with a woman — particularly a beautiful one thought to be the significant other — does increase a man’s appeal in the minds of female evaluators. In a 2018 review, 16 out of 18 studies found adding a presumed romantic partner to a man’s photo made other women score him as more attractive or desirable than the same man solo. Additionally, the studies that varied the beauty of the female partner found that making her more attractive also increased his score.

Assuming the pattern holds, the next questions are: Why do scores improve when men are with women? Does this really represent mate copying?

If so, evaluators should believe — consciously or subconsciously — that men in relationships have positive qualities apparent to their partners but not obvious to onlookers. They must be thinking something like, “He’s no looker, but must have a great ______ if she’s with him.” Into the blank insert personality, mind, sex drive, bank account, et cetera.

To test this directly, a 2016 Evolutionary Psychology study showed the same photo of a male-female pair, but varied the alleged relationship: romantic partners, adopted siblings, cousins or former romantic partners. Participants rated the man’s desirability higher when they were with a “romantic partner” than a relative or ex. They also judged invisible qualities, including intelligence, trustworthiness, humor, wealth and generosity. As you might have guessed, the man-with-romantic-partner photo scored higher on these metrics.

These studies may reflect classic mate choice copying. But some researchers favor an alternative hypothesis: Human mate copying results from our species’ general tendency to learn from others instead of solving problems independently. Compared with chimpanzees, our closest evolutionary relatives, humans imitate our peers far more often. This is especially true with prestigious individuals and when facing a high-risk decision with uncertain outcomes, according to anthropological research (e.g. here, here).

For example, a 2018 Scientific Reports paper had 49 females rate the attractiveness of photos showing male faces, male hands and abstract art on a scale of 1 to 100. Next, each woman saw the distribution of scores from other participants as an indication of popular opinion. Then she reevaluated the photos. The overall initial rating of faces moved 13 points toward the group average. But the same was true for the hands (13 points) and abstract art (14 points). The copying extended beyond mates.

Humans may just have an evolved proclivity to play it safe by mimicking others, which applies to everything from husbands to fine art. Or, over the course of human evolution, it may have been especially beneficial for females to copy mating decisions — an adaptation influencing today’s dating decisions.

So, are humans guppy lovers or just general copycats? The jury is still out.