Electrodes Stuck in the Brain Show How Thought Becomes Speech 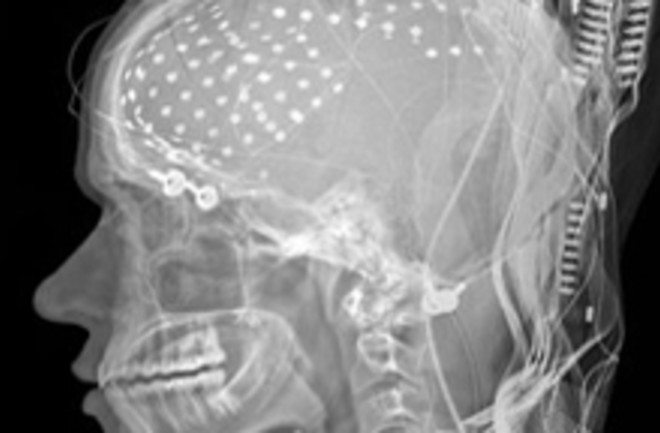 A curious experiment has given scientists an unprecedented look into the human brain as it goes about a vital and everyday task: processing and speaking words. The study, published in Science, found that the brain carries out three steps of the task in about half a second, and that all the activity happens sequentially in the same small brain region, known as Broca's area. The researchers took advantage of a rare procedure

in which epilepsy patients allow doctors to implant dozens of electrodes directly into their brains. While they are awake, the patients answer questions so that doctors can determine which parts of the brain are necessary to maintain language and which parts can be safely removed to treat epileptic seizures [Los Angeles Times].

Three such patients agreed to take part in the language experiment, were given long lists of verbs, and were asked to change some of them to the past or present tense before saying them out loud. The electrodes picked up regular pulses of activity in the brain region

called Broca's area, which lies beneath the left temple. The area of the brain is named after a 19th century physician named Pierre Paul Broca, who became famous for his study of two patients who couldn't speak [NPR News].

While neuroscientists have long believed Broca's area plays an important role in speech, they've previously had little luck in determining exactly what goes on inside the brain region, since standard brain scans like fMRIs don't have enough resolution.

Electrical activity spiked 200 milliseconds, 320 milliseconds and 450 milliseconds after being presented with a new word. The researchers concluded that those peaks corresponded to the times when the brain decided on the appropriate word to use, picked the proper grammatical form, and figured out how to pronounce it [Los Angeles Times].

The findings negate a previous theory that Broca's area is involved only in speaking, and another region, Wernicke’s area, handles reading and hearing. Related Content: 80beats: Mice With a Human Language Gene Have Altered Squeaks and Brain Structure 80beats: TV Can Slow Language Development, Even in the Background DISCOVER: Why Has Steven Pinker Studied Verbs for 20 Years?Image: Ned Sahin