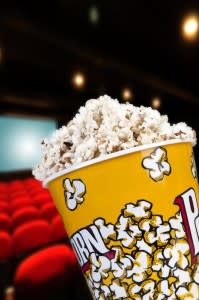 Popcorn and movies are inextricably linked---like cotton candy and county fairs, or coffee and the morning commute. Equally ubiquitous in theaters is the reel of advertisements that show before the film. New research suggests the two are at odds: popcorn actually makes advertisements ineffective. Researchers in Germany sent 96 people to the cinema. Some of the movie-goers got free popcorn (score!) while the others were given a sugar cube (for real?!). Before the film, participants watched advertisements for unfamiliar products---things like Scandinavian butter. When the researchers brought participants back into the lab a week later and asked them to rate various products (those advertised at the theater among them), the sugar-cubers showed a preference for the advertised products whereas popcorners did not.

Apparently the munching gets in the way of our memory. Brand names simply didn't stick for snackers, due to what researchers call "oral interference." As The Guardian describes it,

The reason why adverts manage to imprint brand names on our brains is that our lips and the tongue automatically simulate the pronunciation of a new name when we first hear it. Every time we re-encounter the name, our mouth subconsciously practises its pronunciation...This "inner speech" can be disturbed by chewing, rendering the repetition effect redundant.

That means the advertisement goes in one ear and out the other---exactly what advertisers don't want.

In the study's second part, researchers wanted to see if customers put their money where their buttery mouths were. They repeated the same study set-up, but with charities instead of products. In the post-movie follow-up, participants were given cash to donate. Those participants not distracted by the popcorn gave more money to the charities promoted at the cinema, according to results from the recently published paper in the Journal of Consumer Psychology. But while advertisers may want the popcorn out, cinema owners probably won't let it go without a fight. Overpriced snacks are a theater's real moneymakers. And that doesn't even take into consideration what movie-goers themselves want. Yahoo News describes the challenge of actually acting on this finding,

Certainly, any theater looking to eliminate popcorn from the movies would have an uphill battle. Popcorn at the movies is a century-old tradition. But you know what’s an even older tradition? Making money in America. Expect every kernel to get branded with its own advertisement soon.

So for the time being, take your pick at the cinema: buy the pricey popcorn, or be swayed into spending that money later. Image credit: CANARYLUC/Shutterstock