Drug Trial Scandal at N.Y.U.? What We Know

The New York Times breaks the story of an ostensibly serious case of misconduct at New York University (NYU):

New York University’s medical school has quietly shut down eight studies at its prominent psychiatric research center and parted ways with a top researcher after discovering a series of violations in a study of an experimental, mind-altering drug.

A subsequent federal investigation found lax oversight of study participants, most of whom had serious mental issues. The Food and Drug Administration investigators also found that records had been falsified and researchers had failed to keep accurate case histories...

The violations “jeopardize subject safety and welfare, and raise concerns about the validity and integrity of the data collected at your site,” the F.D.A. said in a letter, obtained by The Times, to Dr. Alexander Neumeister, the studies’ lead investigator.

So what's going on, and how serious is it? The NYT piece is rather light on detail. For instance, it doesn't name the "mind-altering" drug used in the problematic study, only saying it is an experimental FAAH inhibitor produced by drug company Pfizer.

I believe this because ClinicalTrials.gov lists a trial of PF-04457845 for PTSD, a trial which was recently terminated. NYU was one of the research sites. I also think that this trial is the fateful one, as it matches the NYT's description of that study. Interestingly, ClinicalTrials.gov says that the trial was stopped "based on Pfizer portfolio prioritization and not due to safety and/or efficacy concern or change in benefit:risk assessment of PF-04457845".

FAAH inhibitors such as PF-04457845 work by inhibiting the breakdown of endocannabinoids, neurotransmitters in the brain with cannabis-like properties. The best-known drug of this class is probably BIA 10,2474, the compound that led to severe adverse events including one fatality in an ill-fated French trial earlier this year. There's no evidence that PF-04457845 shares similar risks, however.

As to the other NYU studies which were "shut down" as a result of this affair, the NYT gives no details. It's not clear whether those studies were stopped because they had identifiable problems of their own, or as a precautionary measure, or whether they were cancelled by default when the man in charge, Neumeister, left.

Just how serious is this? The NYT says that Neumeister's violations include "that records had been falsified". It turns out that the falsification consisted of Neumeister "signing a fellow investigator’s name on reports" when in fact he or another colleague wrote those reports. This doesn't sound like the most serious kind of document manipulation. Perhaps more serious is the reported failure to complete some assessments: "the research team had failed to assess at least three subjects 24 hours after they had taken the experimental drug, contrary to study protocol"; this might have posed safety risks. 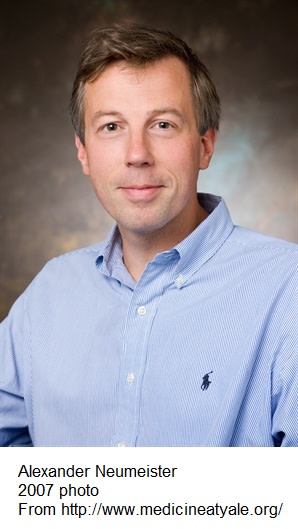 And who is Alexander Neumeister? He is, or was, a prolific and succesful researcher. Neumeister has published 155 scientific papers over a 20 year career, many of which have been highly cited. Neumeister's early research was focussed on depression and especially on the role of serotonin in that disorder. His interest in the cannabinoid system appears to be relatively recent; his first cannabinoid paper is from 2011.

I've found no evidence that Neumeister has ever been involved in a controversy of this kind before, and he appears to have never had a paper retracted. His LinkedIn profile lists his current affiliations as "Anavex Life Sciences Corporation" and "The Catholic University of Bukavu", in the Democratic Republic of Congo. A long way from New York.