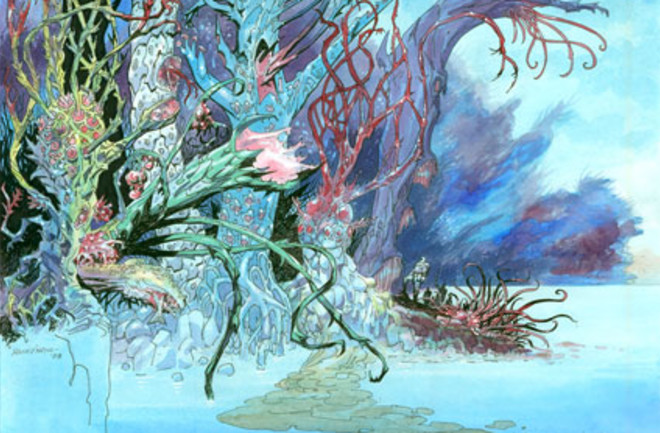 The sci-fi blog io9 recently announced the winners of their Mad Science Contest, in which they invited their readers to dream up useful or just really sweet ways to use synthetic biology. The two winners were: Vijaykumar Meli, who laid out a plan for a bacterium that would improve the nitrogen fixation of rice plants, thereby decreasing pollution from fertilizer run-off and improving yield, which could save plenty of lives in the developing world. Meli says the technique could be accomplished using current technology, including parts from the BioBricks collection of standard biological parts. Elliott Gresswell, who stumbled upon the fictitious lab notebooks of researchers who inadvertently create walking, nanotech-caused-gray-goo-living carnivorous trees, illustrated here by comic book artist Kevin O'Neill. (These fantastic monsters wouldn't be too out of place with the space-faring fungus hats that Jaron Lanier has imagined in synthetic biology's future.) Hats off to the winners. (In Gresswell's case, perhaps that would be, "Heads off"...)