Men whose brains generate and store more dopamine are less prone to aggression, according to a group of German researchers: The Impact of Dopamine on Aggression: An [18F]-FDOPA PET Study To quantify how aggressive the participants were, the researchers got them to play a game, for cash, in which a selfish 'opponent' sometimes stole their money. The player could choose to take revenge by pressing a button that, they thought, would punish the opponent (who didn't really exist - it was all the computer.) Meanwhile, they had to repeatedly press a different button to earn cash. Dopamine metabolism was measured with positron emission tomography (PET) using the radioactive [18F]-FDOPA tracer. When they looked at the brain-behaviour correlations, the results were pretty impressive: 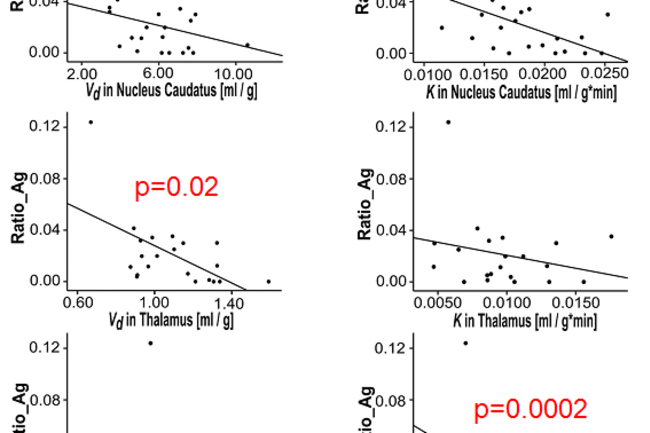 Dopamine (FDOPA concentration) was inversely correlated with aggressiveness across various brain regions (thalamus, midbrain and caudate). More dopamine, less revenge. Now when I picked this paper up, I was skeptical (shock!) and I thought: this seems too good to be true; did they just run lots of comparisons, and focus on the most significant ones? Well, they say they did do 12 different dopamine-aggressiveness correlations, because they measured dopamine in 4 brain areas, and 3 aspects of dopamine metabolism. However, correcting for those 12 comparisons still left one standing: the relationship between dopamine synthesis capacity (K) in the midbrain region, and aggression. The correlation coefficient here was a formidable rho = -0.64. That's a strong link in any context, but in the world of brain-behaviour correlations it's remarkable. Still, it's significant. The effect is rather unexpected however - you might predict that more dopamine would mean more aggression, because antipsychotics (used as tranquillizers) block dopamine transmission while cocaine and amphetamines, which increase dopamine levels, are popularly known for making people erratic and violent. This is also what animal research suggests.