Dogs Don't Process Language With Their Left Brains, After All

A case of left-right confusion misled researchers about how dogs process language. 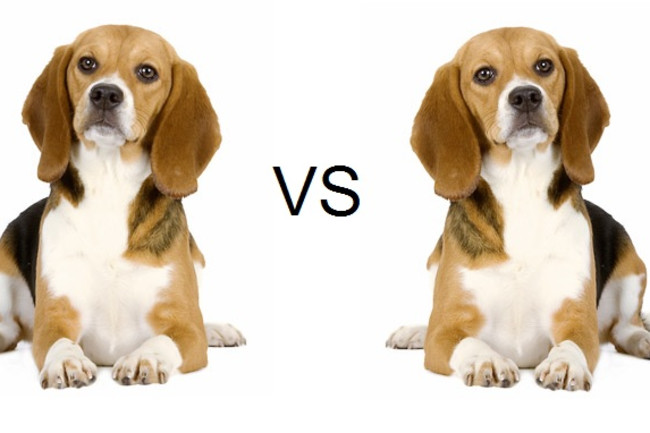 Last August, Hungarian neuroscientists Atilla Andics and colleagues reported that the left hemisphere of the dog brain is selectively activated in response to the lexical properties (i.e. the meaning) of spoken words. This result was very interesting, not least because lexical processing is also lateralized to the left hemisphere in most humans. The paper appeared in the prestigious journal Science. However, in an "Erratum" published today, Andics et al. reveal that they had mixed up the left and right orientation in all of the dogs fMRI images. In other words, the "left hemisphere" activations were actually right hemisphere ones. In fairness to the authors, keeping track of the orientation of MRI images is by no means trivial. It is impossible to tell, from looking at an MRI of a healthy brain, which side is which. So, if a left/right confusion occurs, no-one would notice it. The MRI scanner should log the left/right orientation of the images at the time of scanning, but this data is often stored separately from the images themselves, in a "header", and this header can be lost or corrupted during image processing. Andics et al. say that the confusion in this case happened "in the process of accounting for the different body positions of humans and dogs in the MRI scanner." If I had to guess what happened, I'd say it could have been a case of "over-correction". Maybe someone thought that the images were the wrong way around, and flipped them to 'correct them', when in fact the orientation had already been corrected by someone else. A case of the left hand not knowing what the right is doing, in other words. Whatever happened, the error is one that any fMRI researcher will be able to empathize with, and the authors deserve a lot of credit for coming clean. I'm sure that a lot of researchers have discovered this kind of error in one of their old papers and just chosen to keep quiet about it. On the other hand, I think Andics et al. are pushing it a bit when they say in their Erratum that "This error does not affect the main conclusions of the paper." After all, the second paragraph of the original paper makes much of the fact that "Lexical processing in humans is lateralized to the left hemisphere", and at the end of the original, the authors wrote that:

I'd say that the supposed left lateralization of lexical processing in dogs was a 'main conclusion' of the original paper, or at any rate, pretty important to it. Science have now updated the Andics et al. paper. The new version is the same as the original but with "left" replaced with "right" in various places. In other places the reference to left/right has been deleted, for instance the new abstract says "We found a hemispheric bias for processing meaningful words", where the original said "We found a left-hemisphere bias for processing meaningful words." Indeed, from reading the revised paper you'd be forgiven for thinking that all of the results make sense and fit with the previous literature. But this was also the case with the original paper - a reminder that it's possible to make sense of almost any results if you try hard enough.