Does Brain Scanning Show Just the Tip of the Iceberg?

By Neuroskeptic, a neuroscientist who takes a skeptical look at his own field, and beyond. A different version of this post appeared on the Neuroskeptic blog.

Brain-scanning studies may be giving us a misleading picture of the brain, according to recently published findings from two teams of neuroscientists. Both studies made use of a much larger set of data than is usual in neuroimaging studies. A typical scanning experiment might include around 20 people, each of whom performs a given task maybe a few dozen times. So when French neuroscientists Benjamin Thyreau and colleagues analysed the data from 1,326 people, they were able to increase the statistical power of their experiment by an order of magnitude. An American team led by Javier Gonzalez-Castillo, on the other hand, only had 3 people, but each one was scanned while performing the same task 500 times over. 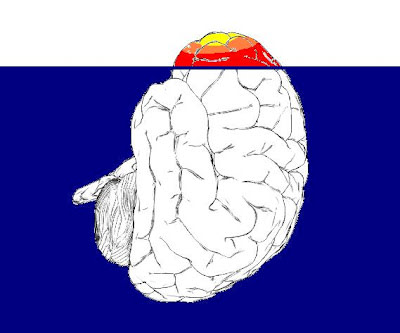 In both cases, the researchers found that close to the whole of the brain "lit up"---that is, showed increased metabolic activity---when people were doing simple mental tasks, compared to just resting. In one case, it was seeing videos of people's faces; in the other, it was deciding whether stimuli on the screen were letters or numbers. Both studies made use of functional magnetic resonance imaging (fMRI), which uses powerful magnetic fields to image the brain and detect the changes in blood oxygen caused by differences in the firing rate of the cells in different areas. There have been many thousands of fMRI papers published since the technique was developed 20 years ago. The great majority of these have produced the familiar “blob” plots showing that different kinds of mental processes engage localized activity in particular parts of the brain. Thyreau and Gonzalez-Castillo, however, were able to detect effects too small to be noticed in such neuroimaging experiments, and found that rather than isolated blobs, large swathes of the brain were involved. This doesn’t mean that everywhere responded equally to the task: the signal was stronger in some areas of the brain than in others, but there were no clear-cut divisions between “active” and “inactive” areas. While the new results don’t overturn the localization theory as such, they do show that it’s only part of the picture. The blobs are real enough, as they show us the areas where activation is strongest, but it’s misleading to think of these areas as the only places involved in a particular task. Other activations, smaller or less consistent but no less real, are hidden under the threshold of statistical noise. fMRI experiments may just be showing us the tip of the iceberg of brain activity. There are however many questions over what this means. Some neuroscientists commenting on these results have argued that by including such a large amount of data, these studies may have been just too powerful---able to detect effects that were so tiny that they have no real scientific importance. Others suggested that they may not be picking up weak brain activations at all, but rather weak signals which are artefacts driven by heart rate, head movement or blinks. These remain open questions at the moment. But Gonzalez-Castillo found another reason why conventional studies might be missing activations: They’re the wrong shape. Most fMRI analyses only look for activations which follow the time course of the task: when you’re doing the task it’s activated, when you’re not, it’s not. Gonzalez-Castillo found that some parts of the brain did indeed follow this "boxcar" pattern, such as the primary visual cortex area V1 (highlighted in red), and the thalamus. That makes sense, as these areas are known to be required for visual information processing.

But other areas showed activation patterns that didn’t fit the usual bill. An area of the occipital cortex, for example, showed a small rise in activity at the start of the task period, then a sustained decrease, and finally a large spike just after the end of the task. This pattern of activation would have gone unnoticed in a conventional analysis. Taken together, these two sets of results reveal that conventional fMRI is a bit of a blunt instrument. As an analogy, suppose that all you knew about your neighbours was from the noises that you heard through the wall. The shouts and screams would be loud enough to reach your ears; the normal conversations and whispers wouldn’t. If you concluded that all your neighbours did was shout, not talk, you’d get a misleading picture of their relationship. That's the bad news. On the other hand, fMRI is clearly more powerful than most neuroscientists have realized, and this holds out hope for cracking some of the trickiest questions facing the field in the future, with larger studies and more sensitive techniques. The journal Nature recently ran a feature, "fMRI 2.0," which included a quote from Peter Bandettini, one of Gonzalez-Castillo's co-authors. “People will be very busy easily for the next 20 years. I would say that fMRI in many aspects hasn't really even begun.”

MindYour Brain Cells Jiggle With Every Heartbeat
Recommendations From Our Store