Do women like sexual objectification? According to this study, it depends on who's doing it.

With the popularity of anti-cat-calling videos this past year, you might think the answer is simple: modern women do not want to be valued for their sexual attractiveness. But these researchers suggest that it’s not so simple. One example they raise is the amount of time and resources some women spend on their appearance “in order to enhance their sexual appeal.” They hypothesize that this apparent conflict is because women actually like being appreciated for sex by some men, but not others. To test this idea, the researchers surveyed recently married heterosexual couples. They found that women who viewed their husbands as “highly committed” were more likely to find satisfaction in being valued for sex than women who saw their husbands as less committed. So, in short: it’s complicated. But is anything in love ever simple? 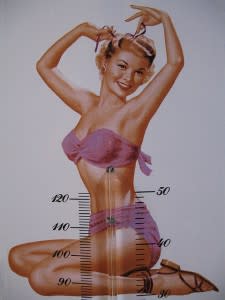 Women Like Being Valued for Sex, as Long as it is by a Committed Partner.

“How do women respond to being valued for sex by their partners? Although research supporting objectification theory suggests that women’s reactions to sexual valuation are primarily negative, a separate body of research indicates that women expend significant effort to enhance their sexual appeal. Evolutionary perspectives suggest that whether women are more or less satisfied with partners who value them for sex may depend on how committed those partners are. Being sexually valued by a relatively uncommitted partner may violate women’s desire to avoid short-term sexual relationships and thus may be negatively associated with relationship satisfaction. In contrast, being sexually valued by a highly committed partner may positively influence women’s relationship satisfaction because it signals to them that they have successfully attracted a long-term relationship partner. Two studies of newly married couples supported these predictions. In Study 1 (N = 109), husbands’ sexual valuation was positively associated with marital satisfaction among wives who perceived that those husbands were highly committed, but negatively associated with marital satisfaction among wives who perceived that those husbands were relatively less committed. Study 2 (N = 99) revealed the same pattern for wives (but not husbands) using a likely manifestation of sexual valuation-engaging in frequent sex. These findings join others to demonstrate that interpersonal processes do not have universally positive or negative implications for relationships; rather, their implications depend on the context in which they occur, including contexts that were reproductively beneficial or costly throughout evolutionary history.”

Related content: NCBI ROFL: Science proves women do have better taste. NCBI ROFL: This just in: women like to be flattered! NCBI ROFL: Why women apologize more than men.