Do We Need a Word for Everything? 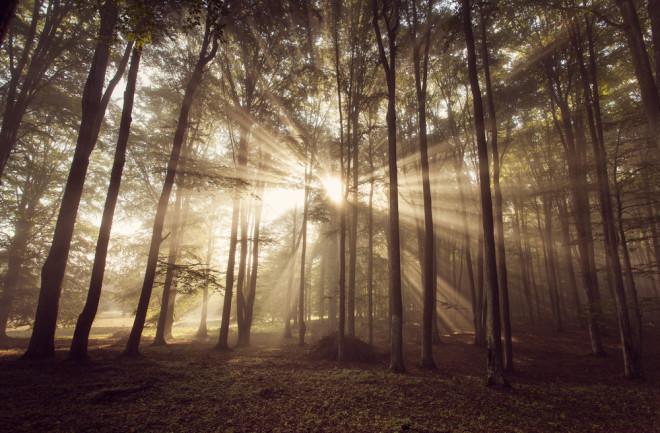 (Credit: danm12/Shutterstock)Imagine walking through a forest near dusk. It is peaceful and quiet; the setting sun paints streaks of light through tree trunks and across your path. The scene is familiar to anyone who's ever taken a walk in the woods. Using one word, how would you describe the experience? You might defer to a string of adjectives: serenity, beauty, peace, fulfillment — words that dance around the feeling without ever precisely pinning it down. But that's not the case in Japanese. In that language, a specific term encapsulates the feeling evoked by sunlight dancing through the trees: komorebi. It’s a tidy way of packaging calm, wonder and harmony into one word. Komorebi has no direct translation in English; it stands on its own, as do many words from other languages that lasso constellations of meaning and emotion in different ways. These words seem to hint that, due to the confines of language, there are ways to perceive the world that remain locked. How and why we put words to things is a hotly debated topic at the heart of linguistics. They allow us to communicate, of course, but to what extent do they help us think?

Connecting the Unreal to Reality

Words, at their most basic, bridge our subconscious to the physical environment. “One of the things that [language] does is allow you to put that information about anything belonging to that category into memory and retrieve it easily, and therefore also talk about it to other people,” says Eve Clark, a professor of linguistics at Stanford University.

Are they here yet? The iktsuarpok is all too real. (Credit: NATALIIA MAKAROVA/Shutterstock)

Most linguists today agree that having a word for something alters our perception of it in some way. This is a version of the "Sapir-Whorf hypothesis," named for Edward Sapir and Benjamin Lee Whorf, Yale University anthropologists who argued that cognition and language are intimately entwined. The initial, or strong, version of the hypothesis holds that without a word for something our minds are essentially stymied — we cannot even think about an unnamed concept.

As words like komorebi make clear, this is intuitively wrong. The feeling the word evokes is familiar to us, even if we couldn’t find a name for it. But a word helps recall the concept in a structured way. This is the basis of the updated, or weak, version of the Sapir-Whorf hypothesis.The weak version has gained support among linguists, as it posits that when we pin something down with language, it's easier to think about and utilize.“There's never been any evidence for the strong Whorfian claim,” says Edward Gibson, a professor of cognitive science at MIT. “What there is evidence for is that when you learn a language, you notice associations that you might not have noticed as you learn. For instance, color terms; you learn what blue is, or what green is, or what yellow is, and category boundaries become more salient to you than they would have without the actual terms.”By this line of thinking, language sorts experiences into discrete packets of information that contain feelings and impressions. Once we've packaged an experience, we can communicate it to ourselves and others.

Listen to the author discuss this story on our "It's Only Science" podcast. (Begins at 24:45) https://soundcloud.com/its-only-science-discover-magazine/episode-9-from-boredom-to-sporedom

How Words Help Us Think

Studies have shown that talking to ourselves during a task helps complete it. In one study, participants were given a simple task: search for an item in a large set of random images. When they said the name of the object out loud, participants were consistently better at finding the object. A similar experiment found the same results for inner speech, that is, words that participants thought to themselves.

“What it comes down to is the relationship between ideas and language and a lot of people would say, you can think in images, but mostly we think in words for those images,” says Deborah Tannen, a professor of linguistics at Georgetown University. “Words and images are inextricably intertwined – if we have a word for something, the image is easier.”

A terrible moment for a tartle. (Credit: Wikimedia Commons)Try a few more untranslatable words on for size: iktsuarpok, an Inuit word for the feeling of anticipation we feel while looking out the window waiting for someone to arrive; tartle, a Scottish word that describes hesitation when introducing someone because you’ve forgotten their name; or mokita, a word from the Kivila language of Papua New Guinea, describing a truth we all know but refuse to talk about.These terms describe very specific situations and their attendant emotions, in a way that allows for easy communication between two beings that may have very different perspectives. Although we may use different shades of color, we’re all working from the same palette.

One Spectrum, Many Viewpoints

The analogy of color works well for describing how words divide the emotional spectrum. Just as we’ve taken a set of wavelengths and imposed color terms on them, words delineate where one feeling begins and another ends, although overlap is inevitable.Color has played an important role for linguists over the years, dating back to a seminal 1969 paper by Brent Berlin and Paul Kay. By analyzing how 98 different languages referred to basic colors, they claimed to have found a series of universal rules for naming colors. The languages varied in the number of colors they had words for, but they all seemed to differentiate between white and black. And, as they added more colors to their vocabulary, they did so in a predictable way, adding first red, then yellow and green, then blue and so on.

Interpretations of mokita vary. While their work has been substantially critiqued and revised, it was an attempt to determine if various cultures break up the world in the same way. If that holds for colors, the assumption goes, it might hold for more complex things like emotions and experiences. If we all tend to break up the world in the same way, then we should be able to understand each other, no matter the language we speak.We can run into trouble, however, when we try to swipe words from other cultures with very different conceptions of the world.

Can't Put Two Into One

“My classic example is the idea of mind and body. Westerners can’t think of mind and body as a single entity because we have two different words,” says Tannen. “The very fact that we’ve said two words makes them two different things in our consciousness. We try to smush the two together, and we can, but it’s not going to be as real to us as if we had one word that meant mind and body.”The associations each word conjures are fundamentally at odds with each other, according to Tannen, and trying to put them together goes against our entire worldview. The solution may be even more fundamental than trying to reconcile opposing concepts. To fuse mind and body, argues Jeff Connor-Linton, also a professor of linguistics at Georgetown, we need to adopt an entirely different system of classification.“The issue is not that we’re trying to take two things and jam them into one word, but that word, or that set of words in the other language, has organized that overall field, that semantic cloud differently than we do,” he says.