Do We All Have Split Brains?

When you're doing two things at once - like listening to the radio while driving - your brain organizes itself into two, functionally independent networks, almost as if you temporarily have two brains. That's according to a fascinating new study from University of Wisconsin-Madison neuroscientists Shuntaro Sasai and colleagues. It's called Functional split brain in a driving/listening paradigm In referring to 'split brains' in their title, Sasai et al. are linking their work to the literature on patients who have had a callosotomy, a radical brain operation that literally splits the brain in two by cutting the corpus callosum, the nerve tract that connects the left and right hemispheres of the cerebral cortex. Only a small number of people with severe epilepsy have a callosotomy, but Sasai et al. argue that the healthy brain can 'split' itself when multitasking. Here's how Sasai et al. illustrate the hypothesis of a 'functional' split between networks in the normal human brain, as opposed to a surgical left-right split:

Sasai et al. demonstrated this using fMRI. Thirteen participants who were scanned while performing a virtual driving task in which they had to navigate a road system. There was also a listening task: the audio stimuli were either a "GPS" voice that gave the participant instructions on where to drive to, or a "radio show" consisting of extracts from recent news articles, that were unrelated to driving. The driving and listening tasks activated distinct regions of the brain, as shown here: 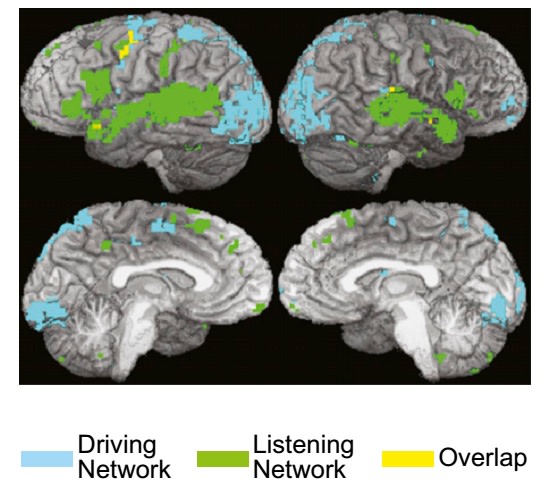 The key results came from participants who were simultaneously driving and listening to either the GPS or the radio show. Here's what happened:

In other words, when the GPS voice was helping the participants to drive ("integrated task"), the brain 'driving network' and 'listening network' were acting in concert, with a high degree of functional connectivity. But when the drivers were listening to the radio show ("split task"), the two networks were largely independent - indeed, by one metric, which the authors call "integrated information", they were completely seperate. Sasai et al. go on to discuss the implications for our sense of self and consciousness

An intriguing question is what happens to consciousness when driving while listening in the split condition... does driving become unconscious, as on autopilot? Or, does a normally integrated conscious stream split into two separate conscious streams that coexist within the same brain, as indicated by studies of patients with an anatomically split brain? Integrated information is thought to be essential for consciousness (28), and the reduction of integrated information demonstrated here is at least compatible with a split in consciousness.

This is really interesting stuff. I'm not sure these results are directly relevant to consciousness, though. We don't know for sure whether (say) the "driving network" is responsible for our conscious experiences related to driving. It's possible that there is a "consciousness centre" elsewhere in the brain (the prefrontal cortex or the precuneus, perhaps), that integrates input from lower-level brain regions such as the "driving network". If so, surely the disconnected nature of the lower-level networks would not necessarily preclude a unified consciousness.