Scholars on both sides of the science-humanities divide have been known to feel that their counterparts just don't think in the same way. But could it be that their brains are actually different? Yes, it could, say Japanese neuroscientists Hikaru Takeuchi and colleagues, who have just published a paper about Brain structures in the sciences and humanities They report that there are significant group differences in brain structure between undergraduate students studying sciences vs. humanities subjects. Specifically, the scientists had more grey matter in the medial prefrontal cortex (p=0.035), but their humanist counterparts had a higher white matter density around the right hippocampus (p=0.018). On average. 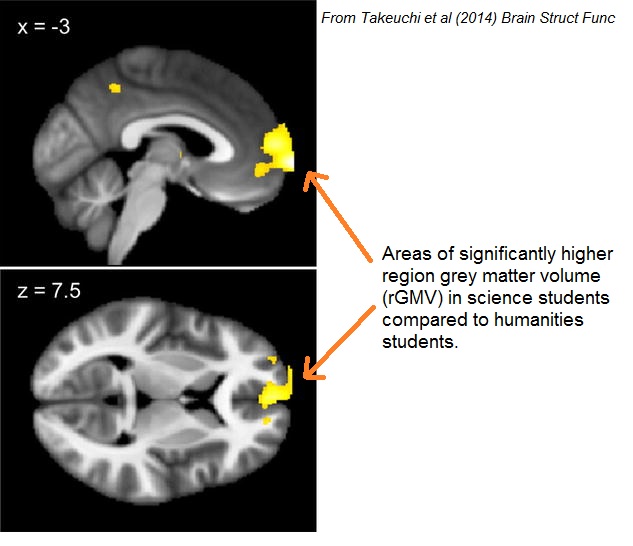 These data came from a large study of 491 undergrads, all of whom had a structural MRI scan. Age, sex, and overall brain volume were controlled for in the analyses - which is good. What does this mean? Takeuchi et al say interpret these results in the light of Simon Baron-Cohen's "Empathizing-Systematizing" theory. According to this model, some people are drawn to impersonal systems, so these people tend to like science, and are also more likely to be autistic. Whereas the humanities subjects, being about people, appeal to the more empathic types, the 'people persons'. And so we read

Even fetal testosterone gets a mention. It's all quite interesting, albeit rather phrenological, but the differences are only marginally significant (despite a large sample size). Also, to get these significant blobs, Takeuchi et al applied voxel-based morphometry (VBM) with statistical cluster correction at p=0.05 over a voxel uncorrected threshold p=0.0025, justifying this with a reference to a methods paper, Silver et al (2011). However, Silver et al in fact recommended a more strict voxel threshold of 0.001; and they didn't study 0.0025 at all, but they did warn that less stringent thresholds produce more false positives.