When a woman started lying to her brain, she began healing. She turned to research and experts to understand how affirmations might help. 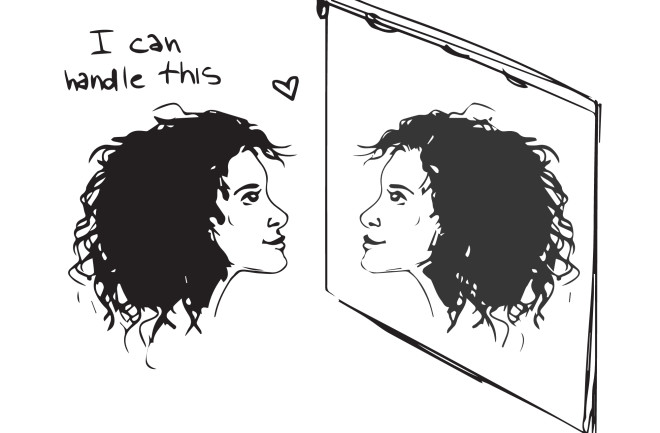 “Do you see this?” my dentist said, pointing a scaler to a section of my gums that was popping out between two teeth. “Yeah,” I said nonchalantly, looking into the mirror he handed me. My gums had been bleeding severely in March of last year, but before I could get them checked, India went into total lockdown to prevent the spread of COVID-19. It took me until the first week of November to walk into a dental clinic. The gum infection had understandably worsened.

The dentist said I might need a surgical procedure to fix the problem. To begin with, he recommended a rigorous oral hygiene routine — massaging my gums with an ointment and rinsing my teeth with a prescription mouthwash — that I diligently followed. When I returned for my follow up three weeks later, my gums had healed so well the dentist ruled out surgery.

I wondered if an intervention that my therapist had introduced me to played a role in my astonishing recovery. At her behest, I had reluctantly started using affirmations in 2019. But, frankly, I found it too woo-woo at the time — and gave up. Lying to myself, “I remain healthy,” when I clearly wasn’t, seemed appalling.

During the pandemic lockdown, my interest in affirmations was renewed when I started doing creativity exercises in Julia Cameron’s book, The Artist’s Way: A Spiritual Path to Higher Creativity, with an online group. Cameron’s a huge champion of affirmations. I restarted my affirmation practice a few weeks before my first dental appointment. Initially, I tried writing out affirmations and combining them with my “morning pages” — a journaling practice that's essential to Cameron’s program. For me, this involved examining my emotional struggles before veering into more uplifting topics, such as things I was grateful for and plans for achieving various goals. Later, I switched to a verbal style.

As I began my dental treatment, I added some gum-related statements for fun: “My gums are healing quickly.” And to my surprise, that's exactly what happened.

What Experts Say About Affirmations

Curious about affirmations, I put my science journalism chops to work. First, I spoke with Angele Close, a Chicago-based clinical psychologist, to understand how she uses affirmations with her clients. Close was quick to point out that her approach was different than the woo-woo version — stand in front of the mirror and say nice things to yourself — popularized by self-help gurus. She emphasizes the importance of creating awareness before jumping to affirmations — something I had inadvertently integrated into my morning pages routine. “A lot of difficulties and suffering comes from the mind’s chatter and thoughts. I feel this is where people get stuck with affirmations, it just becomes another mental thing that they're trying to tell themselves,” says Close. “It doesn't do a whole lot if it doesn't also involve awareness of the emotions and the sensations. Then it's just another thought and it doesn't have very much power.”

Close defines an affirmation as “a stated intention for yourself.” It’s not just positive talk for the heck of it. “I don't think it's just that we're making lemonade out of lemons,” says Close. “I'm not so much leaning into positive psychology as much as cultivating goodness that is already inherently there for us; we're just sort of aligning with it.” Or, to look at it another way, “rather than updating the hard drive, I'm saying what we need to do is just get out of the malware,” she says.

Next, I wanted to find whether scientists had studied affirmations. They had — quite a lot! But here’s the catch: they view affirmations, or rather “self-affirmation” slightly differently. A little history here: According to self-affirmation theory, which was first postulated by American psychologist Claude M. Steele, human beings like to view themselves as adequate and full of integrity. Life situations (relationship problems, job loss, derogatory remarks by a friend) can challenge that inner narrative. People tackle these uncomfortable conflicts in a variety of ways. For example, if a friend warns you about your smoking habit, you may rush to salvage yourself: “Oh, but I eat really healthy.” Or “Well, this year’s too stressful. I’m gonna quit next year.”

Self-affirmation, then, provides a healthier way to buffer yourself from these threats. In their 2014 review paper, The Psychology of Change: Self-Affirmation and Social Psychological Intervention, psychologists Geoffrey Cohen and David Sherman define self-affirmation as “an act that demonstrates one’s adequacy.” Plenty of things in daily life can provide the buffer effect. A friend’s gratitude note — “Thanks for being there for me on that difficult night!” Winning a book contract. Or fondly thinking of your significant other.

When psychologists study self-affirmation in the lab, they usually ask people to write about values that are close to their heart. In studies, this type of strategy has shown to help minority students catch up academically with white kids at school. “It’s really reflecting on things that you really care about,” says Chris Cascio, an assistant professor at the School of Journalism and Mass Communication at the University of Wisconsin.

Self-Affirmations in the Brain

While Cascio was a doctoral candidate of communications studies at the University of Pennsylvania, he co-authored two studies on self-affirmation. I was curious about this intervention in particular because my reflections in my morning pages definitely fell into this category.

For a 2015 fMRI study in Social Cognitive and Affective Neuroscience, Cascio’s team set out to learn what unfolds in the brain when people engage in a self-affirming task. The team divvied up a set of physically inactive adults into two groups — self-affirmation and control cohorts.

Then, researchers provided participants with a list of eight values, such as family and money, and asked them to rank them based on their value system. The researchers directed people in the affirmation group to think about past instances that reminded them of their most important value and also imagine future scenarios about it. For example, if family is someone’s highest value, a future instance may involve a loved one’s birthday. Control participants, meanwhile, had to dwell on instances pertaining to their least important value — clearly, not a very self-affirming activity. It wasn’t a writing task, but was designed to mimic one, since it would have been impossible to pull it off inside an fMRI scanner.

Brain scans of participants showed that areas that are involved in processing reward, positive values and self-worth — many of the areas Cascio’s team had predicted would be involved in the self-affirmation process — lit up significantly more in participants in the affirmation condition during the task, especially while conjuring up future scenarios. “The key with self-affirmations is they don't just instantly bring gratification and help, what they do is they enable us to deal with issues as they come up, because you have this sense of positive self-worth and positive values surrounding you,” explains Cascio. It should really come as no surprise that thinking about family can be so self-affirming. “With my daughter, it’s easily just such a great thing to think about, it makes all my other issues in life sort of calm down and lets me deal with them because they're not as big of a deal as her,” says Cascio.

After the self-affirmation task, the participants read a variety of somewhat scary health messages to the tune of “lack of physical exercise can cause heart disease.” A month later, researchers assessed participants’ physical activity, and the individuals in the self-affirmation condition had been more physically active compared to controls. Messages such as “smoking is bad for your lungs” can scare people and don’t generally inspire them to change. “I don't want to hear that information,” says Cascio. “But self-affirmation sort of drops the wall, lets you process the information and maybe say, Okay, you know what, this is not healthy. I do need to quit and let me come up with a game plan to make that happen.”

The source of self-affirmation is often an area of life that is unconnected to the problem at hand. In fact, the participants in the study didn’t know they were doing a self-affirmation task. “You would not ask participants to write about things they value about physical activity. Sedentary people that do not want to or cannot find time to exercise would probably spend the intervention time counter arguing and not actually consider the values associated with being physically active,” says Cascio.

What Affirmations Can and Can’t Do

Did my affirmation practice heal my rotting gums? I don’t think so. At least, not directly. But these activities probably made me less anxious about my condition. It's possible I was able to focus more on the actual treatment as I spent zero hours worrying and googling “gum bleeding cancer.” A 2019 study in Personality and Social Psychology Bulletin provided evidence that self-affirmation can help people in low-power roles focus better and avoid distractions while performing a cognitive task.

But it’s clear that affirmations aren’t a magic pill to solve all of life’s problems. “It's not a fix in and of itself,” says Close, referring specifically to affirmations in therapy. “It is one practice that I think has to also go along with a number of things people are doing for themselves, if they're trying to get out of some sticky pattern for themselves.” And, sometimes, a person needs to be realistic. “If you're in an abusive relationship, and you're not actually safe, it wouldn't be wise, compassionate or useful to be telling yourself you're safe,” Close says.

But she adds that most of the time people are overthinking, and verbalized affirmations can help them by discarding worst-case scenarios and paving the way for intelligent thought.

As I closed my investigation, I thought back to my first dental appointment. At the end of the consultation, I asked my dentist: “So what are the chances that I’ll have perfect gums after this treatment?” “There’s a 99 percent chance,” he said.

I should also acknowledge that I had a damn good dentist.