According to a provocative paper just published, it's possible to accurately determine how narcissistic someone is by asking them just one thing. 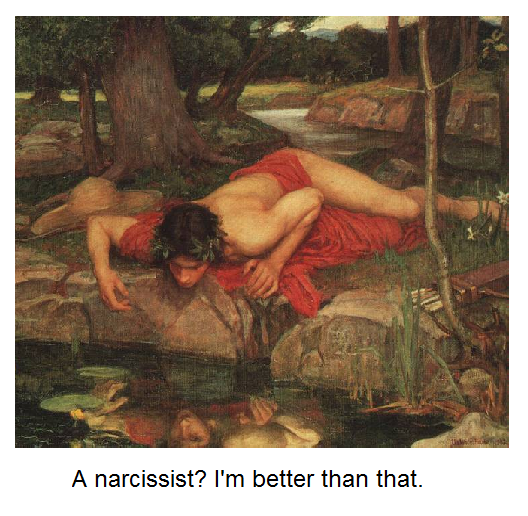 Here's the question in full:

To what extent do you agree with this statement: I am a narcissist? (Note: The word ‘narcissist’ means egotistical, self-focused, and vain.) Answer on a scale from 1 (not very true of me) to 7 (very true of me).

According to psychologists Sara Konrath and colleagues, complex personality tests and lengthy questionnaires may not be necessary, because that single question does a pretty good job. In several experiments, they report that endorsement of "I am a narcissist" - which they rather grandly call the Single Item Narcissism Scale (SINS) - correlates pretty well with scores on the much longer Narcissistic Personality Inventory (NPI) scale (with a correlation coefficient r=0.4-0.45) and has a good test-retest reliability (r=0.8), amongst other things. This is neat. However... it's not all that surprising. The fact that a single question can correlate pretty well with a much longer scale is not surprising. This is a general property of personality questionnaires, as explained in Tal Yarkoni's paper The Abbreviation of Personality, or how to Measure 200 Personality Scales with 200 Items. This undermines the idea that this new result is somehow special to narcissism - a claim that the authors don't make, but that outlets like Time, in their coverage of this study, did

It's not easy to diagnose most personality disorders. But narcissism is a snap - since the narcissists themselves know who they are.

Furthermore, can we be sure that a question like this is even measuring narcissism, given that it is entirely self-report? In their Discussion, Konrath et al say that

We recognize that some readers may be skeptical... are people really aware of their own levels of narcissism? We would argue that, based on the evidence from the current studies, people who are willing to admit that they are relatively more narcissistic than others, actually are.

However, the bulk of their data - 9 out of the 11 sub-studies - can say nothing about how people 'actually are' because it compares the self-report SINS to other self-report measures. While such studies are valuable, by their nature they can't go beyond establishing that the SINS can measure how narcissistic people say they are. Two of the sub-studies did however examine whether the SINS predicted performance on a behavioral measure. Study 5 examined the degree to which participants exhibited aggression after suffering a blow to their ego - being told that they had performed badly on an intelligence test. The idea is that narcissists would show more aggression. However, the SINS did not predict total aggression on this task (p=0.62). There was a marginal p=0.05 effect in a subgroup analysis, but the authors rightly say that "caution is warranted in interpreting these results." Study 11 provided more solid evidence that narcissism is associated with what might be described as spiteful responses to ego threat - giving a (fictional) student a low grade after being primed with negative words. However, this is only one aspect of narcissism. In my view, while Konrath et al have created a single question that performs remarkably well within the sphere of self-report measures, I remain to be convinced that it is a good measure of whether someone 'really' is a narcissist (if indeed this is a meaningful concept). Then again, the same could be said of most self-report questionnaires.