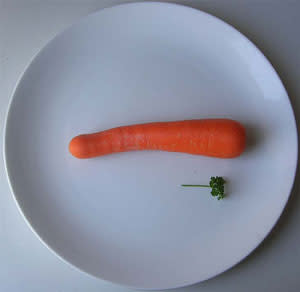 What’s the News: Trouble sticking to your diet? It may not be entirely your fault. Scientists, reporting in the journal Cell Metabolism

, have now learned that when you starve yourself of calories, your brain cells also starve, causing your neurons to begin eating parts of themselves for energy. The self-cannibalism, in turn, cranks up hunger signals. This mouse study may lead to better treatments for human obesity and diabetes. What’s the Context:

The Future Holds: The researchers think that the work could help humans suffering from obesity and diabetes, if scientists are able to develop treatments that selectively control autophagy in AgRP neurons. Not So Fast: Not everyone is convinced that the research can be translated into treatments. “Perhaps the biggest [challenge] is that autophagy is a cellular process that happens in dang near every cell,” neuroscientist Randy Seeley told The Scientist

. “There is no way to control the process in only AgRP neurons.” [via LiveScience