Diamonds in the Sky: The Asteroid Menace 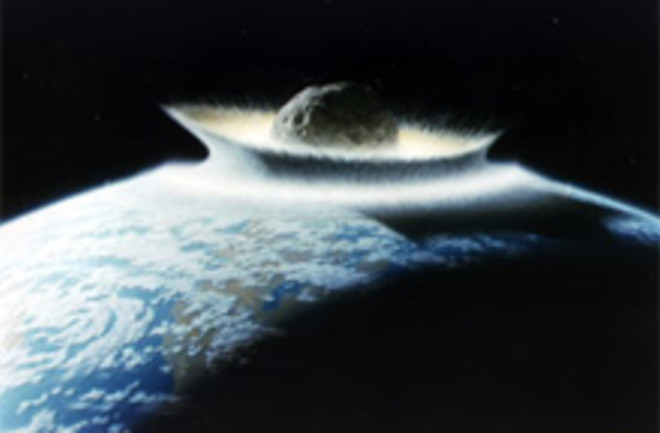 Imagine an asteroid, hurtling toward the Earth. A really big one, a kilometer across, weighing millions of tons. In fact, don't even imagine, watch this video for a simulation. Bad news, right? What to do? If time is really short, we may need to fire up the nuclear weapons in a desperate bid to either destroy the asteroid or alter its direction, but emphasis on the word desperate. It's a long shot that it will help at all.

But hopefully we'll have some more time than that, maybe on the order of 40 or 50 years. Then we can make plans. In How I saved the World, Valentin Ivanov's short story from Diamonds in the Sky, a heroic team of astronauts are living on the surface of an asteroid called "The Hammer" and...painting it black.

OK, here's the theory: A rotating object in space will absorb heat and light from the sun on one side, and emit the photons (cool off) on the other side. As the photons are spat out, the object will be pushed, at least a bit, in the opposite direction. To deal with the 200 million-ton rock-of-death in the story, the entire world has mobilized its resources. The Chinese are building giant solar batteries which will power giant lasers built by the french. The lasers will be pointed at the sunward side of the asteroid, which itself will have been painted black by Russian and American astronauts. The black paint increases the amount of energy the asteroid will absorb and emit, and thus propel the asteroid toward the sun faster, and, in this case, causing it to miss the Earth. Phew!

Of course, there are potential problems with this theory. Asteroids have low gravity, and they are mostly gravel and loose rock. It's not clear if the paint would remain in place. And the expense of trucking all that paint into space would not be inconsiderable. So what are the alternatives? One idea involved installing a lot of small, solar power rockets which would slowly, over time, change the direction of the asteroid. Another would be to install a conveyor belt that digs out asteroid dirt and flings it out into space, changing its direction by Newton's Third Law.

But before any of these can be useful, there needs to be long-range asteroid detection, so the planet isn't caught off-guard. NASA currently relies on optical telescopes and radar echoes beamed from Aricebo radio telescope in Puerto Rice. In 2005, they were able to detect the Apophis Asteroid, which appeared headed for a maybe-hit with the Earth until additional data allowed analysts to refine their estimate and reduce the probability of an impact in 2029 or 2036. So I think we can count getting a 25-year advance warning a success, but last October, astronomers were surprised when a bus-sized asteroid burned up in the atmosphere over Africa. The event lead to a call for more funding for asteroid detection, but with the world economy doing its own freefall, it's not clear that we'll see any moves on that for some years yet.