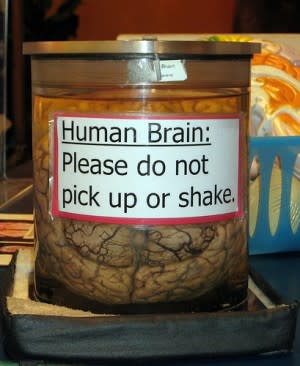 The UC San Diego Brain Observatory would like your brain, please. Especially if you can provide a detailed life history—or, best-case scenario, have already had your biography written—and are just a little strange in the head. Can’t feel fear? Can’t form memories? Can’t smell? These are traits of the people the Observatory already has on its rosters (they have 20 brains and 7 still-living donors), but director Jacopo Annese of UCSD is looking to recruit 1,000 more prospective donors over the next ten years. Apparently one brain he’d love to get his custom-made brain-slicing machinery on is Donald Trump’s: The guy’s had an unusual life, he explains to Bloomberg News

, and with more than 15 books and a reality show to his name, he is nothing if not well-documented. The Observatory

is the outfit that made news in 2009 when it added the brain of H.M.

, a famous amnesiac who could remember only the last 20 seconds, to its collection. (The slicing process

, which took two days and was streamed live, was watched by 400,000 people.) Established to study how ephemeral characteristics like personality, memory, and emotion are reflected in the physical structure of the brain, the Observatory records vast tracts of data about donors, from MRI images to cognitive tests to questionnaires, and, once the brains themselves are freed up, slices them into thousands of thin sheets and reconstructs them into computer models for study. From a scientific perspective, the Observatory’s purview is pretty broad—personality is rather nonspecific, to say the least—and so far the work is more information curation than hypothesis-driven research. But the sheer amount of information Annese’s team is gathering is impressive: a single brain, once sliced and recorded, takes up a petabyte of storage space. And in a nice cross-referencing touch, any research that’s already been done on the individuals—for instance, the donor who can’t fear was the subject of a study in December’s Current Biology

—will be sent to the Observatory when the patient dies. So do you have what it takes to be a brain donor? Contrary to many headlines

, it doesn't sound like you have to meet some subjective level of "interestingness" to make the cut; on the Observatory's donor page

Annese emphasizes that they need the brains of "ordinary, healthy people" as well as those with neurological abnormalities. Abnormalities, one may speculate, that may include the desire to host a reality TV show and handcraft (or hire someone else to handcraft?) a double-combover