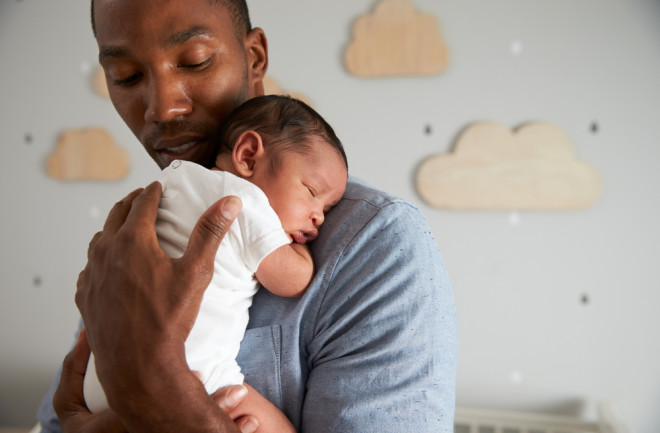 Not all men are Hallmark-happy when they become a brand-new dad. Take the case of one father who remembers seeming “totally disconnected” from his newborn twins as he drove home from the hospital in San Diego after their birth. That feeling built into a debilitating mix of anxiety, depression, grief and shame over the next two months.

“It was really scary for me,” says the 42-year-old mortgage lender. “I couldn’t identify what was happening and didn’t have the tools to deal with what I was feeling.”

He is not alone. In the U.S., 1 in 7 fathers suffers from depression during the perinatal period, or the time during pregnancy and a child’s infancy, according to research. And that skyrockets to 1 in 4 men during the three- to six-month period after birth, and to 1 in 2 dads when the mother also experiences postpartum depression.

In addition, up to one-quarter of expecting fathers experience anxiety during pregnancy, and more than half have anxiety during their child’s infancy — worrisome stats, since research shows a strong correlation between anxiety and depression.

While most people are aware of the perinatal mental health risks for mothers — and many health care providers now screen women for symptoms — paternal mental health disorders are still under the radar, underdiagnosed, and therefore undertreated.

“We are socialized to think of pregnancy as all about the mother, and to think that men don’t need help. There’s simply not enough support for dads as they go through this major life transition,” says Daniel Singley, a psychologist in San Diego who specializes in early fatherhood.

Several factors contribute to paternal perinatal mental health issues, including sleeplessness, financial stress, the quality of the couple’s relationship and a shift in a man’s hormones when he is expecting a child.

All Kinds of Changes

Many people are unaware that a man’s hormonal changes mirror his partner’s during pregnancy. Testosterone levels drop while estrogen and cortisol levels increase. Even the levels of prolactin, a hormone associated with breastfeeding, rise in men. This is the body’s way of preparing men to become fathers: A man with lower testosterone and higher cortisol levels postnatally is more nurturing and responsive to his newborn, and more involved in childcare and play as the baby grows.

But the hormonal shifts need to be just right, or the change can lead to mood disorders.

“I call it the Goldilocks principle. When testosterone levels drop too much, fathers may feel depressed. And if it doesn’t drop enough, it can lead to anxiety or aggression,” explains Will Courtenay, a men’s psychologist who founded Postpartum Men.

Sleep deprivation once the baby arrives also causes neurochemical and hormonal changes and can be a major contributor to mood disorders. The father in San Diego, for example, can trace downturns in his mental health to his twins’ sleepless cycles.

Singley says creating a sense of connection and community for fathers is paramount to help them navigate the transition to parenthood. He co-founded International Fathers’ Mental Health Day (the Monday after Father’s Day), and is an advocate for universal mental health screening for every parent during pregnancy and after birth.

“The sooner you can catch someone who is struggling and intervene, the sooner you see the positive snowball effect,” says Singley.

Some countries are starting to release guidelines for diagnosing paternal perinatal mood disorders. In addition, father-specific prevention resources and treatment options are emerging, including online forums, hotlines and support groups that give men a safe place to share their experiences and concerns.

The father of the newborn twins in San Diego began improving after he started therapy. “It’s been a journey, one of the hardest I’ve had to deal with. Now I hope my experience can help others heal.”