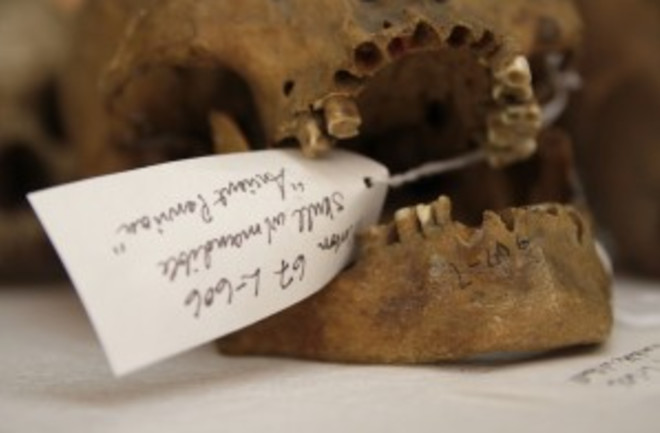 From the Morton Collection of 19th Century Skulls. University Communications, University of Pennsylvania. via Flickr. In my previous dispatch, I described the reasoning behind demographer Carl Haub’s estimate that a whopping total of 108 billion people have lived and died since modern homo sapiens appeared. Since the current world population is about 7.1 billion, the old shibboleth that “more people are alive today than have ever lived” is wildly wrong. A lot of readers probably already knew that, but it was a surprise to me -- and to my editor -- when I first came across the number for a story I wrote for the New York Times. Haub may be off by several billion (he makes a good case that, if anything, his figure is an underestimate), but all I was really after was an order-of-magnitude calculation -- the right number of zeroes. For something so uncertain that is as precise as you can hope to get. What I wondered next was how much of that subterranean horde has been excavated in recent centuries and made available for scientific study. Two anthropologists I asked independently came up with the same rough figure, on the order of 100,000 human remains housed in museums and other collections around the world. Those are skeletons from before the 19th century, and the number includes those that are incomplete. Many, in fact, consist solely of human skulls. The rest of the body was often left behind or discarded. Later on, I consulted a third anthropologist, who told me that, if you include Native American remains that are currently held by museums and subject to being returned to the tribes and reburied (under NAGPRA, the Native American Graves Protection and Repatriation Act), the total might rise to 250,000. (About 39,000 remains have been surrendered so far and 111,000 are unclaimed.) It’s unclear how many of those skeletons will ever be studied by science. But let's include them anyway. Dividing 250,000 skeletons by 108 billion ancestors comes to 0.00023 percent. That vanishingly tiny fraction of the human bone pile is what anthropologists have to work with when they study the prevalence of ancient disease. Meanwhile 99.99977 percent of our forebears remain, in various states of decomposition, buried underground. We will never know how they met their fate. @byGeorgeJohnson Related post: How Many People Ever Lived? Related story: The Long Shadow: Cancer Has Afflicted People Since Prehistoric Times For a preview of The Cancer Chronicles, including the table of contents and index, please see the book's website.