Could a Dose of Ether Contain the Secret to Consciousness?

Researchers may soon be able to measure consciousness as well as we can measure a person's temperature. 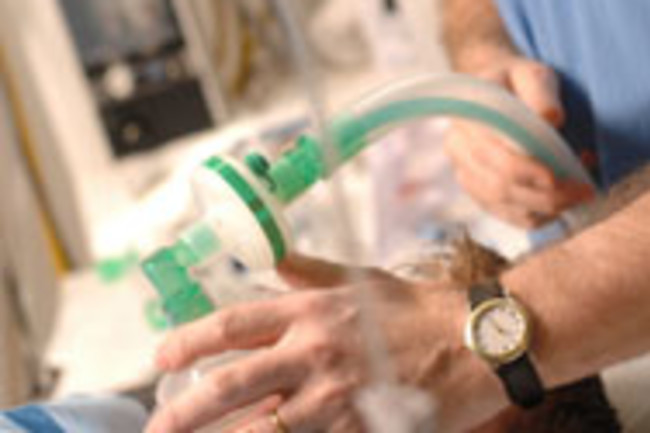 I was looking forward to my first experience with anesthesia. I had been laid out on a stretcher, and nurses and doctors were prepping my midsection so they could slice it open and cut out my appendix. After a bout of appendicitis, a short vacation from consciousness seemed like a pleasant way to spend a few hours. I had no idea what anesthesia would actually feel like, though, and suddenly I was seized by skepticism. I tried to hoist myself up, already swabbed in iodine, as I suggested that I ought to pop into the men’s room before the scalpels came out. I wouldn’t want to interrupt the surgery with a bathroom break. “Don’t worry,” one of the nurses replied. “We’ll do that for you.”

I lay back down, puzzling over that. After a nurse put the IV into my hand, I had to interrupt again: The anesthesia flowing into my arm was not working. I just couldn’t believe that anything would keep me asleep while someone was knitting up my intestines. The nurses and doctors nodded in my direction as I tried to explain the problem to them, but I was sure they weren’t taking me seriously. I took a long, slow blink. And then there were no doctors and nurses around me. I was lying alone in a new room, recovering from my surgery.

Ever since that experience, I’ve wondered what exactly happened in my head. It didn’t feel like sleep. It was not a blackout, either. It was as if the surgeons had simply cut a few hours out of my life and joined together the loose ends. So I decided to get more familiar with the science behind anesthesia. To my surprise, I discovered that anesthesiologists are a bit in the dark themselves. “How anesthesia works has been a mystery since the discovery of anesthesia itself,” writes Michael Alkire, an anesthesiologist at the University of California at Irvine School of Medicine, in the new Encyclopedia of Consciousness.

The first public demonstration of anesthesia during surgery took place in 1846 in Boston. A man named Gilbert Abbott took some deep drafts of ether, and surgeons began cutting a tumor off his jaw. The audience was shocked that Abbott did not scream and squirm. One London newspaper expressed the amazement that many must have felt: “Oh, what delight for every feeling heart to find the new year ushered in with the announcement of this noble discovery of the power to still the sense of pain and veil the eye and memory from all the horrors of an operation.”

Today anesthesiologists have a number of drugs to choose from, as well as machines to administer them safely. Every year tens of millions of people get general anesthesia. In 2008 Columbia University epidemiologist Guohua Li reported that each year only one person in a million suffers an anesthesia-related death in the United States. But for all these achievements, anesthesia remains deeply puzzling.

To begin with, anesthesiologists have no precise way to determine when people lose consciousness. In Abbott’s day, doctors would simply ask their patients to respond, perhaps by opening their eyes. A lack of response was taken as a sign of unconsciousness. Many modern anesthesiologists talk to their patients, but judging the response is made more complicated by the muscle relaxants that they also use. Sometimes the anesthesiologist will use a blood pressure cuff on a patient’s arm to block the muscle relaxants in the bloodstream. Then the doctor asks the patient to squeeze a hand.

This sort of test can distinguish between a patient who is awake and one who is out cold. But at the borderline of consciousness, it is not very precise. The inability to raise your hand, for example, doesn’t necessarily mean that you are unconscious. Even a light dose of anesthesia can interfere with your capacity to keep new pieces of information in your brain, so you may not respond to a command because you immediately forgot what you were going to do. On the other hand, squeezing an anesthesiologist’s hand may not mean you’re wide awake. Some patients who can squeeze a hand will later have no memory of being aware.

Seeking a more reliable measuring stick, some researchers have started measuring brain waves. When you are awake, your brain produces fast, small waves of electrical activity. When you are under total anesthesia, your brain waves become deep and slow. If you get enough of certain anesthetics, your brain waves eventually go flat. Most anesthesiologists monitor their patients using a machine known as a bispectral index monitor, which reads brain waves from electrodes on a patient’s scalp and produces a score from 100 to 0. But these machines aren’t precise either. Sometimes patients who register as unconscious can still squeeze a hand on command.

The problem with all these methods is that anesthesiologists don’t really know what it is they are trying to measure. So Alkire and other scientists are using neuroimaging to peer into the anesthetized brain to see what happens when it succumbs. In a typical experiment, a volunteer lies in an fMRI brain scanner, which can measure the amount of oxygen used in different parts of the brain. A researcher gives the volunteer anesthesia and measures how those brain regions respond.

Such studies find that the entire brain powers down on anesthesia, its activity dropping between 30 and 60 percent. The results are somewhat ambiguous, since brain regions respond differently to different drugs. But one region consistently becomes quieter than average: a grape-size cluster of neurons almost dead center in the brain known as the thalamus.

Is the thalamus the brain’s power switch? It certainly has the right stuff for the job. A thicket of neurons sprout from the thalamus and branch across the cortex, the outer layer of the brain where we interpret the information from our senses and make decisions, then back into the thalamus. As the brain’s sensory relay station, the thalamus is responsible for sending rousing signals to the cortex when we wake up from ordinary sleep. In 2007 Alkire and his collaborators probed the role of the thalamus by putting rats in a box flooded with anesthetics, which caused the animals to keel over. If Alkire and his colleagues then injected a tiny dose of nicotine into the thalamus, the rats immediately came to and stayed conscious even as they continued to inhale the anesthetics.

Yet studies on patients with Parkinson’s disease show that the thalamus cannot completely explain how anesthesia works. Surgeons can treat Parkinson’s by implanting electrodes deep inside the brain. These electrodes release pulses of current to tamp down the wild movements associated with the disease. Lionel Velly, an anesthesiologist at Mediterranean University in Marseille, France, ran an experiment in which he used the electrodes in the other direction, to record electrical activity in the brain.

In a second surgical procedure less than a week after the brain surgery, Velly and his colleagues took readings from the deep-brain electrodes in 25 patients while also collecting electrode readings from their scalp. The scalp recordings let the scientists monitor the cortex, while the deep-brain electrodes let them monitor the thalamus. Velly’s team found that the cortex started producing deep, slow waves as soon as patients became unresponsive. The thalamus, on the other hand, didn’t change for another 15 minutes. The pattern Velly saw was the reverse of what you would expect if the thalamus were the brain’s master switch.

The secret of anesthesia may lie not in any single clump of neurons but in the conversations taking place between many clumps in the brain.

Giulio Tononi, a University of Wisconsin neuroscientist, suggests that the secret of anesthesia may not in fact lie in any single clump of neurons. It may lie instead in the conversations that take place between many clumps in the brain. Normally information from our senses races from one region of the cortex to another, getting processed in different ways in each place. Some regions help us recognize faces in a scene, for example, while other regions help us figure out what emotions those faces are expressing. The sensory signals travel through a mass transit system made up of long branches of neurons that crisscross the brain. This system has a few hubs through which many connections pass. One is the thalamus, but certain parts of the cortex also serve as hubs.

Although the brain may become less active under anesthesia, it usually doesn’t shut down completely (if it did, we would die). In fact, when scientists played a tone into the ears of an anesthetized cat, its cortex still produced strong bursts of electricity. But its responses were different from those of a waking cat. In an anesthetized cat, the brain responds the same way to any sound, with a noisy crackle of neurons. In a waking cat, the response is complex: One brain region after another responds as the animal processes the sound, and different sounds produce different responses. It’s as if the waking brain produces a unique melody, whereas the anesthetized brain can produce only a blast of sound or no sound at all.

Tononi suggests that this change happens because anesthesia interferes with the brain’s mass transit system. Individual parts of the cortex can still respond to a stimulus. But the brain can’t move these signals around to other parts to create a single unified experience.

Tononi argues that the difference between brain music and brain noise defines the very nature of consciousness. Consciousness is the brain’s ability to be in a complex state, even in response to a simple stimulus like a tone. The vast number of different states our brains can enter when we are aware gives consciousness its marvelously rich feeling. In order to produce those states, the brain needs lots of neural elements that are active and able to respond, as well as the mass transit system that links them all together.

Working from this hypothesis, Tononi and his colleagues are trying to develop tools that can monitor levels of consciousness in anesthetized patients. They are also developing software to measure the complexity of the brain’s responses to stimuli. If Tononi’s idea is correct, anesthesiologists may be moving toward being able to gauge consciousness much as doctors gauge a patient’s temperature with a thermometer. Perhaps some of the mystery of consciousness itself—a question that has vexed philosophers for centuries—will be solved on the operating table.