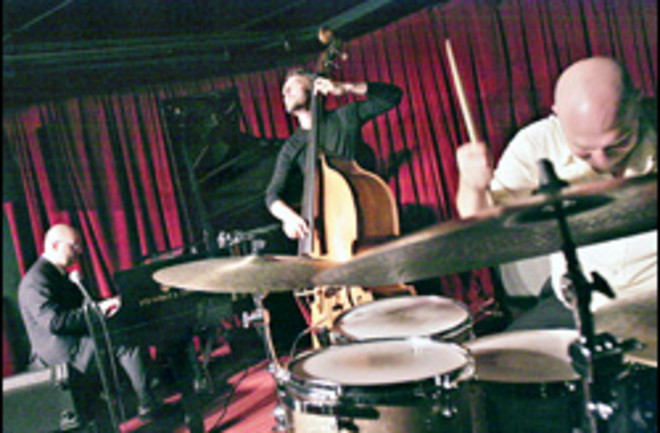 The Bad Plus have a blog! How cool is that? (Via Marginal Revolution.) The BP are a jazz trio consisting of pianist Ethan Iverson, bassist Reid Anderson, and drummer Dave King, known for an energetic and imaginative style that ranges from free jazz to playful pop. Their version of Nirvana's Smells Like Teen Spirit became quite a hit as these things go, and rightfully so. The blog is called Do The Math, so perhaps they are trying to compete in the nerd-off. It's fantastic that a working jazz combo (or musicians more generally) have their own blog; anyone know of any other examples? I haven't had a chance to explore the blog very closely, but I noticed that they link to a recent NYT article by Ben Ratliff on Jazz at Lincoln Center's upcoming Coltrane series, in honor of what would have been his 80th birthday. One of the pieces being performed is Giant Steps, an especially interesting tune. Coltrane knew his music theory backwards and forwards, and he put a tremendous amount of thought into composing Giant Steps; rumor has it that it was meant as an exercise for students, but has since grown into a popular standard, in much the same way as Bach's Goldberg Variations. (Apparently Trane himself decided that it was too mechanical, and didn't play it very much after the record had appeared.) The solo is based on an extremely rapid series of a particular type of chord changes, now known as Coltrane changes. In the tune, Coltrane plays four notes in each chord (the root, second, third, and fifth) as a series of eighth notes, changing chords every two beats. For those of you keeping score at home, that means each note is played precisely once before moving on the the next chord, not leaving much time for ornamentation. You can buy a whole book of transcriptions of Trane's different takes of the chorus. I know you want me to link to an audio file of Giant Steps, don't you? But I have something even better. Via Wikipedia, here is an animation of Giant Steps by Michal Levy. It's extremely well done, and the visual representation tracks the music faithfully while adding its own imaginative dimension.

For your obligatory science content, MR also points to a very clever animation of different dimensions, all the way up to ten! (Okay, the mixing of quantum mechanics and the higher dimensions is a little bizzare; but the pictures are nice.) Those MR guys are pretty good linkers, for libertarians.