Cognition And Perception Are Separate After All?

Can our beliefs, motivations and emotions influence our visual perception? Are cognition and perception ultimately inseparable? A lot of recent psychological research says "yes" to the question. For instance, it has been claimed that carrying a heavy backpack makes a hill look - not just feel - steeper. Other researchers say that feeling sad makes things seem darker - not just metaphorically, but literally. However, according to a new paper by Yale psychologists Chaz Firestone & Brian J. Scholl, all of these claims for 'top-down' cognitive influence on perception are mistaken:

Cognition does not affect perception: Evaluating the evidence for 'top-down' effects.

The emergence of so many empirical papers reporting top-down effects of cognition on perception has shifted the broader consensus in cognitive science. Indeed, such alleged top-down effects have led several authors to declare that the revolution in our understanding of perception has already occurred, proclaiming as dead not only a "modular" perspective on vision but often the very distinction between perception and cognition itself.

However, they say, while there have been over 160 published reports of top-down influence, all of these experiments suffer from one or more 'pitfalls' that call the results into serious question. 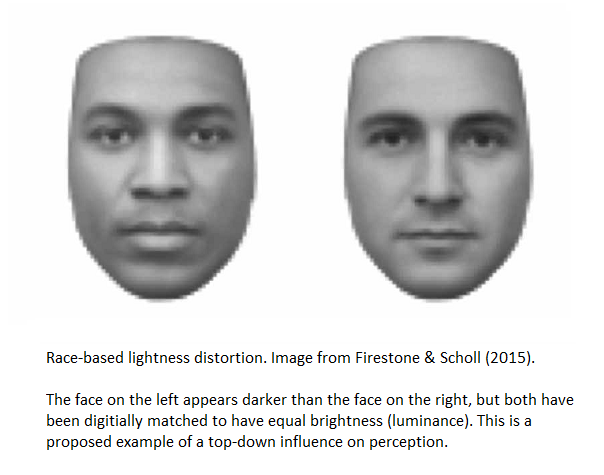 For instance, Firestone and Scholl identify 'perception vs. judgement' as one of the six pitfalls. As they put it,

Many alleged top-down effects on perception live near the border of perception and cognition, where it is not always obvious whether a given cognitive state affects what we see, or instead only our inferences or judgments made on the basis of what we see... Any time an experiment shifts perceptual reports, it is possible that this shift reflects changes in judgment, rather than perception.

They take as an example the claim that

throwing a heavy ball (rather than a light ball) at a target increases estimates of that target’s distance (Witt et al., 2004). One interpretation of this result (favored by the original authors) is that the increased throwing effort actually made the target look farther away... However, another possibility is that... after having such difficulty reaching the target with their throws, subjects may have simply concluded that the target must have been farther away than it looked.

Firestone and Scholl go on to cite a 2009 study which used the same ball-throwing task but in which the participants were asked more detailed questions. In this study it emerged that the participants were indeed basing their distance judgements on more than just pure visual perception. This is a long paper, and in the course of it the authors discuss numerous other cases in which, they say, 'top-down' influence over perception has been wrongly inferred for various reasons. However, could there still be hope for the idea of cognitive penetration of perception? Firestone and Scholl readily agree that attention can affect visual perception, making attended objects seem brighter, nearer, and larger than unattended ones. In fact, they say that mistaking 'attentional effects' for perceptual ones is one of the six pitfalls of this field of research. Yet isn't attention itself a top-down, cognitive process? The authors acknowledge this point. However, they say that while attention can come under 'top down' control e.g. when we decide to attend to something, our attention can be and often is drawn to things 'automatically', in other words it can arise out of visual perception 'bottom up'. They see attention as a kind of special case, quite different from the other claimed kinds of top-down process. Nonetheless, attention does seem to be a 'chink in the armor' of the otherwise 'impenetrable' perceptual module.