People who drink a lot of coffee - and other caffeinated beverages - find it more difficult to identify and describe their own emotions. This is the claim of a new study, published in the Journal of Psychoactive Drugs, from Australian researchers Michael Lyvers and colleagues:

Caffeine use and alexithymia in university students.

"Alexithymia" - Greek for "no words for feelings" - is the psychological terminology for an inability to put ones emotions into words. Lyvers et al did a survey study of 106 university students and found that alexithymia was correlated with the amount of caffeine consumed per day (p < 0.01, correlation coefficient r = 0.26). 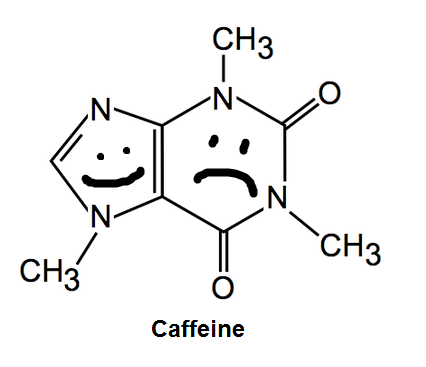 As a heavy coffee drinker myself, these results caused me to feel 'surprise'. Wait, or do I mean 'sadness'? It's hard to put it into words. Anyway, it got my attention. Lyvers et al say that

Alexithymics reported consuming nearly twice as much caffeine per day on average compared to non-alexithymic controls or those with borderline alexithymia.

As to why this is the case, the authors speculate that

Perhaps those with alexithymia consume caffeine more heavily than non-alexithymics in an attempt to optimize inherently low arousal levels.

However, I see reasons to be cautious is interpreting this. Firstly, the association wasn't specific to coffee, since alcohol use was also correlated with alexithymia. Secondly, the alexithymia measure was self-report - the Toronto Alexithymia Scale (TAS). This involves questions like: "I am often confused about what emotion I am feeling." and "It is difficult for me to reveal my innermost feelings, even to close friends." My concern here is that because this is a self-report questionnaire, the TAS is measuring worries over alexithymia as opposed to alexithymia per se. Moreover, I notice that in Lyver's dataset, the TAS was quite strongly correlated with self-reported anxiety, apathy, dis-inhibition and executive dysfunction. So I'd say that it's plausible that all of these self-report scores are reflecting some basic 'tendency to give negative answers on questionnaires' which might reflect neuroticism, low self-esteem or (if you prefer) just realism. This might even account for the correlation with coffee and alcohol use as well, if we see these as 'negative'. Maybe neurotic people don't drink more coffee, they just worry about drinking coffee more.