Captain America's Enlistment and Experimentation: Was It Ethical? 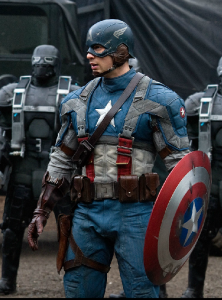 Steve Rogers, the man who would become Captain America, was not subjected to an accidental burst of gamma radiation or the bite of a radioactive spider. Instead, he willingly enlisted and subjected himself to an experimental process for the creation of super-soldiers. His superpowers were deliberate and intended. However, the circumstances of Captain America's enlistment into the army are, at best, questionable. After my chat with Maggie Koerth-Baker on bloggingheads, I got thinking about how the super-solider experiment holds up under the scrutiny of medical ethics. I'm not so sure that Steve Rogers gave his consent to the experiment in an informed and uncoerced manner. For any medical research to be considered ethical it must adhere to basic standards. A global standard for medical ethics is the Declaration of Helsinki. Devised and published by the World Medical Association in 1964, the Declaration of Helsinki is a guiding framework for all medical research involving human beings. It has been revised over the years to meet modern needs, with the most recent and 6th revision being published in 2008. There are three points of the Declaration that appeal directly to the type of experimentation done to create Captain America. They are:

#6. In medical research involving human subjects, the well-being of the individual research subject must take precedence over all other interests. #8. In medical practice and in medical research, most interventions involve risks and burdens. #9. Medical research is subject to ethical standards that promote respect for all human subjects and protect their health and rights. Some research populations are particularly vulnerable and need special protection. These include those who cannot give or refuse consent for themselves and those who may be vulnerable to coercion or undue influence.

Can you really say with confidence that General Chester Phillips had Rogers' best interests in mind, that Rogers' wasn't under any sort of coercion (coughpropagandacough), and that the good 'ol US-of-A wasn't bending some rules to build a better soldier? Let's take each of these points from the Declaration of Helsinki in turn.

#6. In medical research involving human subjects, the well-being of the individual research subject must take precedence over all other interests.

Steve Rogers before the experiment is scrawny, yes. But unwell? By no means. As with all heroes, Rogers' induction into the army is a mixed story with multiple versions declaring different things. The general story, however, is that Rogers was healthy but unfit for military service. Too short, scrawny, and weak to serve. So in terms of general health, Rogers has everything to lose and nothing to gain from the experiment. However, Rogers is, before the treatment, a poor specimen of a human being. He is clearly not confident, nor happy with his physical ability. Furthermore, he is unable to pursue his life as he sees fit. He wants to join the military and is disallowed because of his biology. Thus, we could argue a second way of defining well-being in a more holistic fashion. By the holistic well-being criterion, Rogers would be benefiting from improved physical condition which would enable him to pursue more courses in his life as well as achieve his goal of supporting the US war effort against the Third Riech. Therefore, as General Phillips is giving Rogers an option he wouldn't otherwise have, we could argue that he is providing Rogers with an opportunity to improve his well-being. The catch is that the Declaration says Rogers well-being should take precedent over all other interests, not merely that it should be improved. It seems that Rogers' interests are the interests of the US government and those conducting the super-soldier experiment. So everything should be dandy, right . . . Right? More on that in a moment.

#8. In medical practice and in medical research, most interventions involve risks and burdens.

Goes without saying. Everything has risks. The ethical issue here is that the patient understands, clearly, just what risks are involved. Given that Rogers was in the process of signing up to get shot at by Nazis, I think we can presume he was OK with the additional risks posed by the super-soldier experiment. From everything I've read, it seems that the General explained the research, its experimental nature, and the risks involved to Rogers before even offering it to the scrawny would-be soldier. If that's the case, the super-solider experiment passes point #8.

#9. Medical research is subject to ethical standards that promote respect for all human subjects and protect their health and rights. Some research populations are particularly vulnerable and need special protection. These include those who cannot give or refuse consent for themselves and those who may be vulnerable to coercion or undue influence.

Ah, we come to the point. So Rogers has the same interests as the US government – convenient, that. I'm honestly torn on this one. Here you have a young man whose country in the midst of a World War, churning out hyper-patriotic propaganda and defining masculinity through a helmet and a gun. Though the coercion isn't direct, the overwhelming influence of the war effort could be construed as undue. It's hard to not see the nationwide war effort as anything but an inappropriately and dangerously coercive influence on Rogers' decision to go through with the super-soldier experiment. Are his interests in line with the US government's because he's been mesmerized by all the flag waving? Not so fast. One could also argue that Steve Rogers is a consenting adult who was 1) not drafted, 2) attempted to enlist multiple times, and 3) desired to defeat the Third Reich based on factual information (i.e. they were horrible). Furthermore, the General didn't conscript him, but instead sent Rogers through a series of tests after which Rogers was allowed to volunteer for the test if he so desired. Every step Rogers took toward the experiment was his own. Sure, signing up for the military could be the result of patriotic coercion, but it's unlikely to cause a man to do everything and anything in the face of repeated refusals to enlist. Steve Rogers' best interests and well-being were in mind when he signed up for the experiment, he was aware of the risks, and his consent was as uncoerced as one could realistically hope. Is this a grey area? Certainly. The experiment was rushed, generally untested, and had no precedent in previous medicine. Was it necessary to win the war? Probably not. But, by and large, I'm a consequentialist and a utilitarian. Rogers knew what he was getting into and how massive the risks were. Things worked out. He got what he wanted. Lots and lots of people benefited, perhaps Rogers most of all. By the yardstick of consequentialism and the Declaration of Helsinki, the super-soldier experiment and Steve Rogers' enlistment in the military were ethical. But just barely.