Can You Say "Mommy"? Babies' Brains Like Repeated Syllables 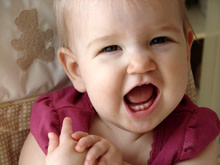 Earlier this month we wrote that alliteration can help you maintain your memory, and now it seems that patterns are also good for those whose brains are just developing. Babies' brains are the most active when they hear words with repeated syllables, according to Judit Gervain from the University of British Columbia, and that my help to explain why their first words are often words like "mama" or "papa." Of course, it's hard to separate any innate preference for repetition in babies from the influence of their parents' baby talk. So Gervain and her colleagues spoke to the 22 newborns in their study with nonsense words, including ones like "mubaba" with repeated syllables, and others like "penaku" without them, and then looked at brain scans of the babies. Sure enough, the language centers—like the temporal and left frontal areas—saw increased activation with the repeat syllables, Gervain says, and nothing special for words without repetition. So there you are: a scientific explanation for all that nonsensical baby talk.