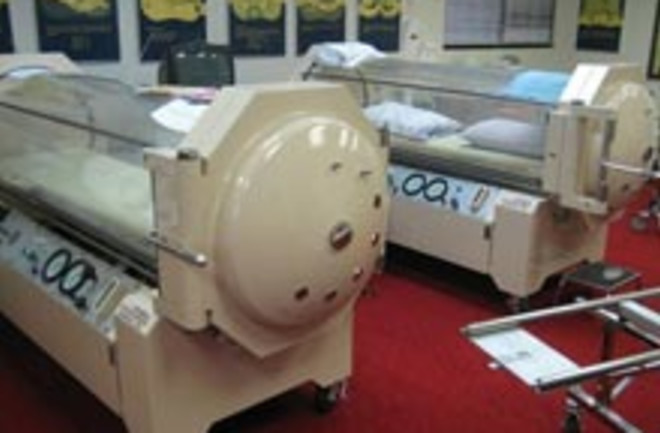 A controversial autism treatment has gotten a credibility boost. The first rigorously scientific study of hyperbaric oxygen treatment, in which autistic children breathe in extra oxygen inside a pressurized chamber, found that children who received the treatment showed improvement in social interactions, although researchers note that the small study didn't examine whether the treatment had long-term effects. Study leader Dan Rossignol says

the use of hyperbaric therapy for autism has been gaining popularity in the US where parents can buy their own hyperbaric chamber if they have a spare $14-17,000 [BBC News].

Other parents take their children to clinics for treatments that usually cost between $120 and $150 per session, and which typically aren't covered by insurance providers. Rossignol says he expects the findings to generate controversy, and notes that

he too was initially very sceptical of the idea but was prompted to do more research after the treatment showed benefits for his two sons who have autism. "We're certainly not talking about a cure, we're talking about improvements in behaviour, improving certain functions and quality of life" [BBC News].

of 62 children found that those who received 40 hours of treatment over a month were less irritable, more responsive when people spoke to them, made more eye contact and were more sociable than kids who didn’t receive it. They were also less sensitive to noise (some autistic children experience a kind of sensory overload from loud sounds and background noise). The most improvement was observed in kids older than five (the study included children ages two to seven) who had milder autism [Scientific American].

Researchers aren't sure why the treatment may be having a beneficial effect on autistic kids.

One theory is that oxygen can help reduce inflammation and improve flow of oxygen to brain tissue. Hyperbaric treatment ... has been shown to have some benefit in other neurological conditions such as fetal alcohol syndrome and cerebral palsy [BBC News].

Researchers say the study's positive results, published in the journal BMC Pediatrics, should prompt further investigations. But not everyone is convinced that the results will bear up under scrutiny.

Critics also note that Rossignal [sic] is one of the biggest promoters of hyperbaric oxygen therapy for autistic children and has staked his career on obtaining positive results. The study was funded by manufacturers of the devices, who also have a vested interest [Los Angeles Times blog].

Related Content: 80beats: Autism and Vaccines Are Not Linked, Court Declares 80beats: Cancellation of Controversial Autism Study Causes Both Relief and Outrage DISCOVER: Can a DVD Teach Kids with Autism to Understand Emotions? DISCOVER: Autism: It's Not Just in the Head examines other bodily effects of autism DISCOVER: Childhood Vaccines' Link to Autism Is Debunked

More From Discover
Mind
Weed Might Not Make You Creative After All
Mind
How Does Alzheimer's Disease Lead to Death?
Mind
Gut Bacteria's Role in Anxiety and Depression: It’s Not Just In Your Head
Mind
What Psilocybin Psychedelic Mushrooms Are Teaching Us About Human Consciousness
Mind
How Failing Could Actually Help us Succeed
Mind
Can Playing Video Games Make You Smarter?
Recommendations From Our Store
My Science ShopDiscover STEM Kits
My Science ShopDiscover 2022 Calendar
My Science ShopStrange Science
My Science ShopElements Flashcards
Shop Now
Stay Curious
Join
Our List