Can a Single Neuron Tell Halle Berry From Grandma Esther? 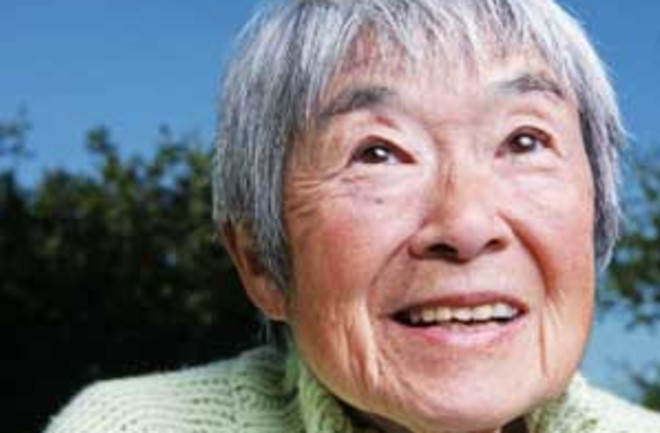 Four decades ago, an MIT neuroscientist named Jerry Lettvin had a sudden inspiration about how our brains make sense of the world. What if each of us had a special set of neurons in our head whose only job was to recognize a particular person, place, or thing? It was a strange idea, but given what Lettvin knew about the brain, it was plausible. To describe his idea to his students, he made up a story [pdf].

The story was about Alexander Portnoy, the protagonist of Philip Roth’s novel Portnoy’s Complaint, which had just been published. The novel is a long monologue delivered by Portnoy as he lies on the couch of his psychoanalyst. In Lettvin’s version, Portnoy instead decided to go to a neurosurgeon named Akakhi Akakhievitch. Dr. Akakhievitch had discovered 18,000 neurons in the human brain that respond uniquely to a person’s mother. Since much of Portnoy’s misery was caused by thoughts of his overbearing mom, Dr. Akakhievitch opened up his brain and removed all those mother cells.

After the operation, Dr. Akakhi­evitch tried a test. “You remember the blintzes you loved to eat every Thursday night?” he asked.

“They were wonderful,” Portnoy replied.

“So who cooked them?”

Portnoy stared at him blankly.

Based on this great success, Lettvin told his students, Dr. Akakhi­evitch then extended his search to grandmother cells.

Lettvin’s story became the stuff of legend, and scientists began to argue heatedly about whether such “grandmother cells” actually existed. Today the majority view is that those cells are as fictional as Dr. Akakhievitch. But Jeffrey Bowers, a psychologist at the University of Bristol in England, thinks his colleagues gave up on grandmother cells too soon. In a paper published earlier this year in Psychological Review, he declares that it is time to take Dr. Akakhievitch seriously.

The idea of grandmother cells emerged from provocative studies showing that different neurons respond to different stimuli. Lettvin, for example, discovered that some neurons in the retina of a frog respond most strongly to specific patterns of light. Some respond primarily to edges, and some respond especially to movements of objects. These selective neurons seem to be picking out visual clues that help the animal quickly detect passing bugs.

Other researchers found selective neurons in the brain as well. The farther the signals from the eyes traveled, the more specialized the stimuli that triggered the neurons to fire. In 1969 Charles Gross, a neuroscientist then at Harvard, discovered that certain neurons in monkey brains respond strongly only to the sight of a hand, and other researchers later found monkey neurons that respond strongly only to faces. Gross resisted calling these neurons “face cells” or “hand cells.” Nevertheless, his work became some of the most commonly cited evidence that grandmother cells might exist. If monkeys had neurons that responded only to hands, perhaps there were neurons farther up the line that responded to even more specific things—like grandmothers.

Since then, a steady trickle of studies have kept Lettvin’s tale alive. The most spectacular results have come from the work of Rodrigo Quian Quiroga of the University of Leicester in England. For the past eight years, he and his colleagues have been studying epilepsy patients who have had electrodes implanted in a region of their brains called the medial temporal lobe, as part of a study to identify the source of their seizures. Quiroga showed the subjects 100 pictures. The pictures included photos and drawings of celebrities as well as landmarks and various familiar objects. The patients had to press one button if a picture was of a human face and another if it was not.

In their first such study, Quiroga and his team were able to observe the individual activity of 993 neurons. They found that 132 of them responded to at least one picture. And of those responding neurons, 51 fired in response to only a single person or thing. One neuron responded only to Halle Berry, for example.

Amazingly, the “Halle Berry” neuron responded to any picture of her, including one in which she was dressed as the masked Catwoman. Even the name Halle Berry triggered that neuron, which was silent at the sight of other actresses or their names.

Quiroga also found the response of these neurons to be very swift. The patients took about a second to push a button in response to each picture, but the neurons took only a third of a second to respond.

As intriguing as those findings might seem, most neuroscientists find the arguments against grandmother cells more convincing...

But if you open the hood on one of these programs, you will not find any processor behaving like a grandmother cell, responding only to a single face and being solely responsible for recognizing it. Instead, it is the pattern of all the processors taken together that corresponds uniquely to each face. This sort of network behaves like a crowd of people in a football stadium creating huge pictures by holding up colored squares. A single person may hold up the same color when producing different pictures; the unique picture emerges only through the collective behavior of the crowd.

Despite all that, Bowers is not convinced that large networks can explain the brain’s remarkable powers of recognition. “I find it striking that you can locate a neuron that responds to only one face out of a hundred,” he says. In the network-based model, each neuron should light up for most or all of the faces. He also disputes the claim that true grandmother cells must respond only to a single stimulus. A single neuron that is dedicated to one input might also respond to related inputs, but only up to a threshold. At the high level of stimulus needed to produce a clear interpretation (“That person is my grandmother”), the cell could still function as Lettvin envisioned.

On the other hand, Quiroga suggests that the grandmother cell interpretation is also incomplete. He says his own experiments probably did not detect grandmother cells in the strictest sense. The electrodes he used could pinpoint only about 100 neurons among the tens of billions in the brain. Just because Quiroga detected a single neuron responding to Halle Berry did not necessarily mean that other, faraway neurons were not firing as well. Quiroga also used only about 100 images in his experiments. A neuron that responded solely to Halle Berry among the items Quiroga showed might well have responded to many other images he did not show.

Using statistical methods, Quiroga and his colleagues calculate that about 0.1 percent of the neurons in the medial temporal lobe (about 1 million) respond to any given image. And out of the many thousands of images that our brains can recognize, he estimates that each neuron can respond to a few dozen.

That interpretation suggests a genuinely new insight into how our brain recognizes people and objects: not with grandmother cells but not with huge networks, either. Instead, the brain seems to use what is known as a “sparse-coding network,” in which small groups of neurons work together to recognize an object and in which each neuron may be able to join a few different groups.

Quiroga has begun testing this idea using improved techniques to extract more information from brain electrodes. This will enable him to eavesdrop on several hundred neurons at once. In such a large sample, he may be able to find two neurons responding to the same image in the same brain. If he succeeds, it will be the beginning of a whole new story. It may not be as colorful as the tale of Dr. Akakhievitch, perhaps, but it could at last bring us a lot closer to understanding what goes on in your head when your eyes see a pattern of light and dark and your brain shouts, “Grandma!”