Call of MRI: Action Video Games And The Brain

No sooner had I published my last post, on the much-discussed "women's brains are more active than men's" study, than another neuroscience paper triggered a fresh media storm. This time, the subject was videogames, and the headlines were alarming:

Here's the paper, published in Molecular Psychiatry by University of Montreal researchers Gregory West and colleagues. The truth is that this paper doesn't say anything about brain "rotting" or "disease", but the results are fairly interesting, if complex. West et al. carried out three studies. In the first, they show that regular players of 'action' videogames had "reduced grey matter in the left hippocampus" compared to people who rarely or never played these games in the past 6 months. 'Action' videogames were here defined as first or third person shooters, e.g. Fallout 3, Borderlands, Call of Duty, and Gears of War. 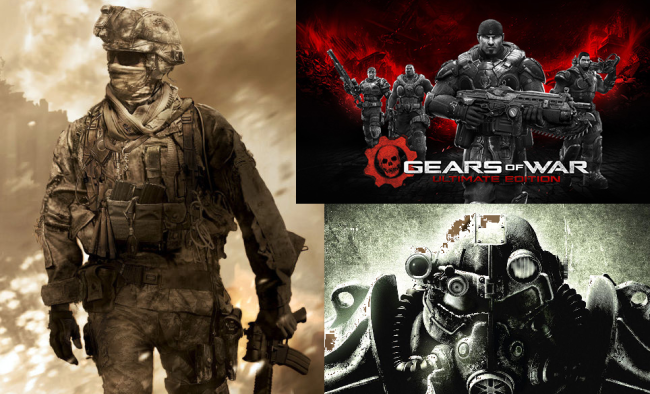 The first study was purely correlational, and couldn't establish whether action games caused the left hippocampal reductions in gamers. However, West et al. went on to carry out an experimental study to address this. In this second study, non-gamer participants were randomly assigned to play either action games, or Super Mario 3D platform games. The Mario games were a control condition. Participants played their assigned games for 90 hours (2–4 hours per day, 3 times each week.) Action gaming led to a reduction in grey matter in the right hippocampus - but only in people with a 'response learning style'. In those with a 'spatial learning style', action games increased grey matter in the left hippocampus. West et al. explain that action games promote rapid, stimulus-response type learning, while Mario involves more spatial processing. In people already predisposed to response processing, action games could therefore shrink the hippocampus, a region involved in spatial processing:

These results were mostly replicated by a third study, in which all participants were assigned to play an action game (there was no control group.) This time, 'response learners' showed bilateral reduction in grey matter, and 'spatial learners' showed a bilateral increase, following the action game training. In short, the headlines were half right. West et al. did find that action videogames can cause part of the brain to become smaller, but only in about 50% of people - in others, they do the opposite. Also, we should remember that grey matter reduction isn't necessarily a kind of "damage", a word that West et al. never use. It's quite possible that these changes are only temporary.

So how solid are these results? This is a really well-designed set of studies. The fact that West et al. conducted three seperate experiments that all converge on the same conclusion is very impressive - any one of these studies could have been published as a paper in its own right. The sample sizes are moderate (n=33, 43, 21 respectively.)

However, I have some concerns over the stats. In their analyses of grey matter volume (conducted using VBM), West et al. mainly report uncorrected p-values. This means that they didn't apply multiple comparisons correction to take into account the number of voxels they examined. Here's how West et al. explain this:

Regions of interest (ROIs) were structurally defined in advance of data collection, based on our a priori hypotheses. Because of this, an uncorrected threshold of P<0.001 for the peak voxel within ROIs was set, namely the hippocampus, amygdala and entorhinal cortex. We also report effects that pass small volume correction, which is based on an even more conservative statistical threshold. In these cases, the resultant P-value accounted for the number of voxels in the hippocampus.

This doesn't seem quite right to me. Granted that the hippocampal region was of a priori interest, it's still necessary to correct for multiple comparisons within the region. This is what the small volume correction analysis does. Most - but not all - of West et al.'s results are significant after small volume correction.

Another problem arises however when we look outside the hippocampal region. There seem to be numerous 'blobs' scattered across the rest of the brain, at least in the uncorrected maps shown in the paper. Here's the results from Study 1, for example, showing that the hippocampus was just one of many regions to show a volumetric reduction in action game players: 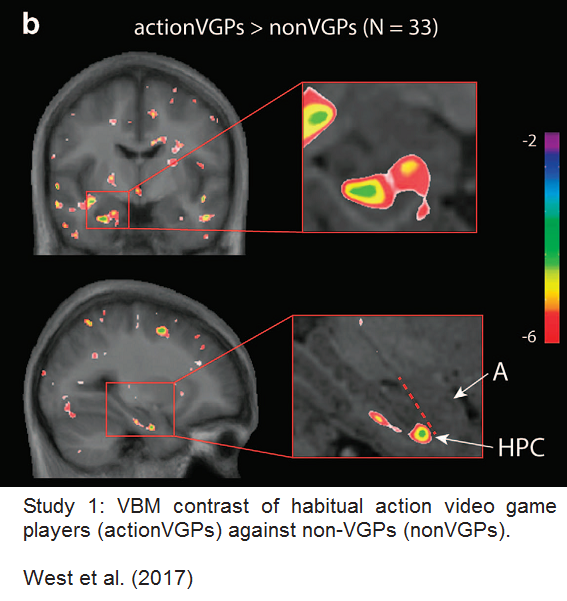 Overall though, this is a well-designed paper which presents a lot of data. Despite my stats quibbles, the fact that the three studies all pretty much find the same thing is very encouraging, and it means that much as I would like to (I love Borderlands), I can't just write off these results as flawed. Maybe games really do change the brain.

Edit: See also this post regarding a 2015 paper from the same authors: No, there is no evidence for a link between video games and Alzheimer’s disease.