What sex is your brain? 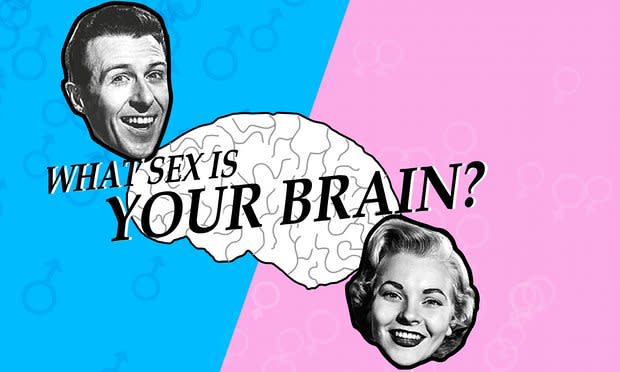 Well? This is the question asked by an exhibit at London's Science Museum which created a bit of a hoo-ha this week. As the Guardian puts it:

The Science Museum in London is facing criticism for a “junk science” exhibit that asks visitors to test whether they have a blue or pink brain. The interactive exhibit presents a series of questions that claim to measure whether a person’s brain is more typically male or female. Neuroscientists said the suggestion that the brains of men and women are fundamentally different was based on unhelpful gender stereotypes rather than sound science.

The contentious test is available online here. It consists of six tasks, each of which seems to be adapted from a commonly-used paradigm from experimental psychology: there's a mental rotation task, an embedded figures test, and four others. In a blog post, museum staffer Alex Tyrrell says that

The game presents studies scientists have carried out to investigate if there are small differences on average in the way that men and women complete certain tasks, largely based around the recognition of abstract shapes and patterns. This game – which dates back 16 years to the gallery’s inception – was designed to be tongue in cheek and provocative (think silly voices akin to a Pathé news reel) and visitors are invited to take some of the real tests that scientists used, scoring male or female ‘brain points’ on a ‘sex-o-meter’ that is coloured pink and blue. As a Museum we always attempt to present ideas in different ways – labels and objects but also games, animations and ‘interactives’ – and in this case the artistic licence taken in the year 2000 to create a provocative exhibit appears outdated. Certainly from preliminary work looking at the latest scientific evidence, the ideas presented are now in question.

In my view, the exhibit is not unscientific, but it's presented poorly. The message seems to be that men and women differ, on average, in their ability to perform the six cognitive tasks in the exhibit. There is indeed evidence for this: for instance, one very large study found a sex difference in mental rotation with a non-trivial effect size of Cohen's d = 0.53, although this is probably the task with the single biggest sex differences. My problem with this is that the exhibit is presented as being a way to measure the sex of 'your brain', which is misleading. Framing the issue as a 'brain' issue primes people to think of these sex differences as biologically determined and 'hardwired', which is debatable (seeforexample). Performance on these tasks is no more or less brain-based than any other behavior, and there's nothing magic or 'brain-' about these tests (this is the same issue I have with so-called "brain training" games).