What do self-reports of brain activity tell us? 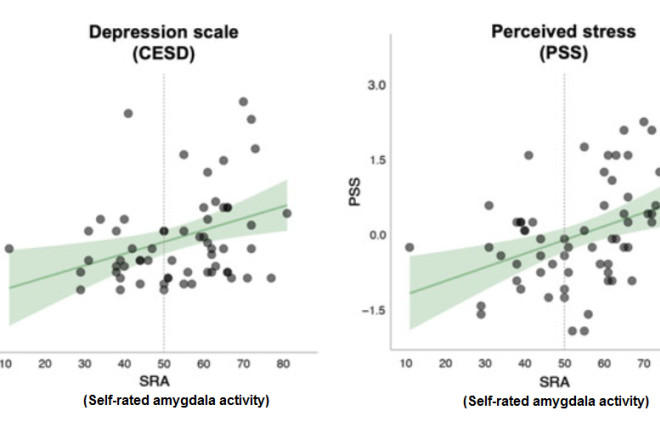 On Twitter this week I joked that neuroscientists could save money on brain scanners by just asking people how active their brains are.

However, it turns out that there has already been a study that actually asked people to do this, as I found out thanks to Niclas Kuper’s very helpful reply.

This paper came out back in April (not April 1st) but I missed it at the time. It’s called Self-rated amygdala activity: an auto-biological index of affective distress

In this study, the authors asked 63 people to estimate their own ‘threat-related amygdala activity’ (TRA). The same participants had earlier taken part in an fMRI study in which TRA was measured using an emotional faces task.

It turned out that the participants weren’t able to accurately report their own TRA – there was no absolutely no correlation between the self-report ratings and the actual fMRI-measured TRA.

However, self-rated amygdala activity was correlated with self-rated anxiety, depression, stress, and neuroticism:

The authors interpreted this result as revealing an ‘auto-biological belief’ among the participants, in which the participants equated the amygdala with negative emotions:

These data and prior work suggest that auto-biological beliefs may be a useful indicator of psychological functioning. Indeed, self-rated amygdala activity, while unrelated to actual TRA, predicted affective distress across a variety of self-report measures.

I was quite excited when I saw this paper because I’m fascinated by all kinds of ‘folk neuroscience’. It certainly seems plausible that many people today do think of negative emotions as amygdala activity, given how this brain region is portrayed in pop culture.

However, my excitement in this paper waned when I read the text of the video presentation which participants saw immediately before doing the self report. This video stated:

The amygdala is a small, almond-shaped structure near the center of your brain that is responsible for processing emotions, particularly those associated with threat (such as anger or fear)… studies from our lab and others have shown that amygdala reactivity is a marker of vulnerability for emotional disorders such as depression and anxiety.

Unfortunately, we can’t really conclude anything about auto-biological amygdala beliefs from this study, because it turns out that those beliefs were explicitly suggested by the experimenters.

Still, it would be interesting to do a more detailed study of whether people are able to self-report aspects of brain activity. I suspect that people wouldn’t be able to do this at first but, with training (something like biofeedback) it might be possible. I wonder if cognitive neuroscientists would be any better at this than other folk.