One theory taking flight says only vocal-learning animals can sync up with musical rhythms, and those species make up an exclusive club: humans, some birds, elephants, whales, and dolphins. 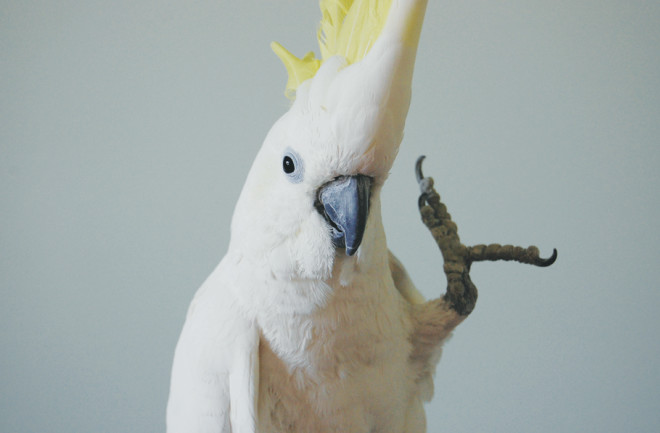 Snowball is an enthusiastic dancer (favorite: the Backstreet Boys). Patel's tests show that the cockatoo can keep almost any beat. | Irena Schulz / Bird Lovers Only

So you think you can dance? You probably can, thanks to a brain that is remarkably adept at perceiving rhythms and synchronizing our body movements to what we hear. The ability to get into the groove—to step to the beat—is a hallmark of our species, raising the question of why we might have evolved this ability.

Neurobiologist Aniruddh Patel at the Neurosciences Institute in San Diego looks for answers in brain scans and laboratory tests and also in the fancy footwork of what seems to be another dance-loving species, the sulfur-crested cockatoo. By monitoring the brain regions that activate when people hear a beat, Patel and colleague John Iversen find evidence that our hearing system is entwined with the motor control systems that guide our muscles. Patel proposes that these connections are a happy accident of evolution, a by-product of the brain development that allowed humans to learn to speak.

We take our ability to groove for granted, but it turns out that scientific studies show it's quite rare. How many other animals can rock out?

It’s a behavior that seems so simple at first glance: How complicated can it be to bob up and down to music? You can do it while you’re drunk. And yet almost no other species can. In 2009 a team of Mexican researchers conducted a study with monkeys, trying to train the animals to tap to the beat of a metronome. Even after a year or two of training, the monkeys couldn’t do it. The results surprised people, because these monkeys are routinely taught really complicated things, and following a rhythm seems as if it should be easy.

That finding appears to support the theory that music gave humans an evolutionary edge over our primate relatives. So why are you unconvinced?

One theory is that music promoted group bonding when people danced together, and that in turn promoted the survival of groups. The counterargument is that maybe our sense of musical rhythm is just a by-product of another cognitive function that gave us an advantage. But what other function could that be?

In 2006 I wrote a paper suggesting that rhythm could be a by-product (pdf) of another function that requires us to tightly integrate sound and movement: vocal learning, or the ability to mimic sounds made by other individuals. That led to the hypothesis that you need a vocal-learning brain to be able to move to a beat. The implication is that dogs and cats can never do it, horses and chimps can never do it, but maybe other vocal-learning species can do it.

I proposed that idea, but it was purely hypothetical until a few years after, when along came Snowball.

Snowball is the dancing cockatoo who gained Internet fame via a video showing him bobbing in time to a Backstreet Boys song. What did that video tell you?

It looked like evidence that another species had rhythm but was clearly not using this behavior for anything adaptive. For me, that means that the ability to keep time to music came along for the ride with another mechanism. And why would you have a brain that allows you to connect complicated sounds and complicated movements? Maybe animals that are vocal learners have the necessary connections between the auditory centers and motor planning regions of the brain.

So I thought, let’s make this into a testable hypothesis. Let’s see if a cockatoo, which has a vocal learning brain, responds to a beat in the same way humans do. So we got in touch with Snowball’s owner and conducted carefully controlled experiments. We took the song he danced to on YouTube and slowed it down and sped it up without changing the pitch, and he synchronized at many different tempi. Another research group searched through YouTube videos and found 14 other species—parrots and one Asian elephant—that showed evidence of rhythm perception, suggesting that Snowball is not a freak. We’re also working on a collaboration with a research group in Germany on dolphins, another species that engages in vocal learning.

Are you still doing research on Snowball?

Yes. In those first experiments we made sure that Snowball wasn’t just responding to cues from his owner, that he was reacting to the beat on his own. But his owner told us that he really preferred to dance with a partner.

So we did an experiment that we haven’t published yet in which we had Snowball dance by himself; dance with someone in the room encouraging him, saying “good boy” and so forth; and then dance with someone else. We found a huge and enormously clear effect. He dances least when he’s by himself, more when hears vocal encouragement, and most when he has a partner. This suggests that dance is a social thing. It’s possible that vocal learning capacity is necessary for rhythm perception but that it’s also important to have a brain that seeks out tight social bonds.

What is the actual mechanism that allows a person to move to a beat? How do we know when the next beat is coming?

When you move to a beat, you are doing something very sophisticated: You’re moving to a model in your head. What do people do if you ask them to tap to a metronome? They tap right on the metronome beat or a little bit ahead of it, not a few milliseconds after it. It’s not a reaction to stimulus, it’s anticipation. And this is exactly what the monkeys in that study I told you about were not able to do. They reacted. They always tapped 200 or 300 milliseconds after the metronome click. So what are you doing when you tap exactly on the metronome beat or just ahead of it? You’ve built a model of the time interval in your head, and that’s what you’re synchronizing with.

My colleague John Iversen is doing some really elegant work now with brain imaging, looking at syncopated rhythms, because with those the sound is shifted off the beat, but you still feel the beat. With brain scans we can look at what’s going on in the brain as you internally construct that feeling of a beat without any brain activity related to processing sound. So it’s a very clean, clear way to decouple the beat sensation from the processing of sound.

Why would the brain systems responsible for vocal learning also work for rhythm perception and dancing?

To speak, you’ve got to have precise motor control over your vocal apparatus. You’re controlling your larynx, your tongue, your breathing. It’s a very complicated series of motions, and you’re doing them in a precise order. And you’re constantly monitoring the feedback. Think about learning to reproduce a novel sound: If I say you’re going to learn a new sound today, the French eu, you try to do that by listening to me and then making a sound and comparing it to the model you have in your head.

I think because of vocal learning we have some direct connections between auditory centers and motor planning regions of our brain—not just the actual motor control centers but the regions that do the more abstract planning of movements. In vocal learning we use that brain circuitry to control our vocal apparatus. But in beat perception, that circuit seems to connect our hearing and our limb movements, or our head movements, or whatever we use for dancing.

Because of these connections, we seem to use the motor system to actually predict the timing of rhythmic and periodic sounds. Brain imaging of beat perception seems to support this. When people perceive sound with a beat, even when they aren’t moving, fMRI [functional magnetic resonance imaging] scans show activation in the premotor cortex and supplementary motor areas. It’s almost as if we’re using our motor systems to hear the beat.

Several researchers have linked our sense of rhythm to brain regions called the basal ganglia. What are they, and what do they do?

The basal ganglia are deep brain structures that are generally thought to form a motor sequencing and motor control circuit but also seem to be involved in various cognitive functions, including beat perception. It’s interesting because this region of the brain seems to have been modified in evolution due to vocal learning.

I collaborated on a study, just published in Behavioural Brain Research, that tested the rhythmic abilities of people with basal ganglia lesions. We gave them a test in which they had to tap in time to a metronome. The metronome would change tempo at some point, and they had to change their tapping to synchronize with it. These people did not perform normally, which is another indication that the basal ganglia are involved in rhythm.

How is your own sense of rhythm?

I’m not bad—I’m not a drummer, but I played musical instruments. But we would love to find some people who really have no rhythm. We all know people with two left feet who don’t seem to feel it on the dance fl oor. Are they just shy in public, and would they do fine if you gave them a rhythm test in the privacy of their own home? Or are there people who really don’t feel the beat? There’s a small percentage of people who are musically tone deaf; maybe there are people who are rhythm deaf too.