A fascinating little paper in Brain examines Neurology and psychiatry in Babylon. It's a collaboration by British neurologist Edward H. Reynolds and Assyriologist James V. Kinnier Wilson. The sources they discuss are almost 4,000 years old, dating to the Old Babylonian Dynasty of 1894 - 1595 BC. Writing in cuneiform script impressed into clay tablets, the Babylonians left records that (unlike paper) were inherently durable, so many of them have survived. All understanding of cuneiform was lost, however, for thousands of years, only to be deciphered in the 19th century. The texts reveal that

The Babylonians were remarkable observers and documentalists of human illness and behavior. However, their knowledge of anatomy was limited and superficial. Some diseases were thought to have a physical basis, such as worms, snake bites and trauma. Much else was the result of evil forces that required driving out... many, perhaps most diseases required the attention of a priest or exorcist, known as an asipu, to drive out evil demons or spirits.

For instance, one tablet provides an overview of epilepsy and seizures. 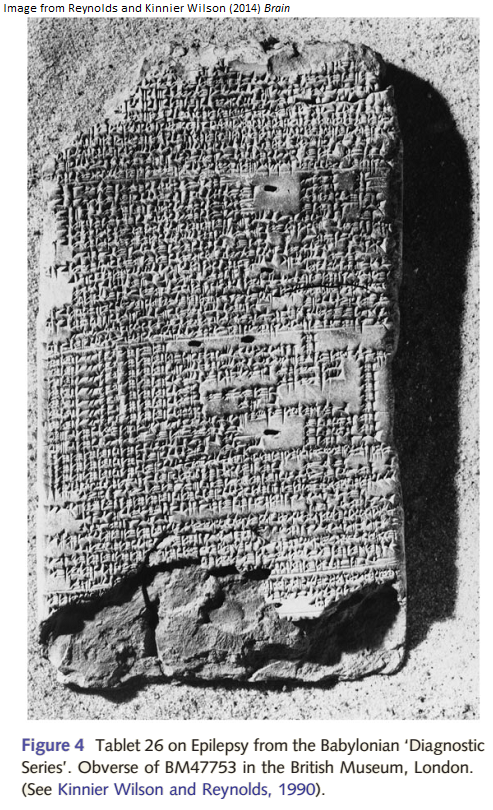 The text shows a detailed understanding of the symptoms and prognosis of this disorder, which the Babylonians called miqtu. However, they didn't think it had anything to do with the brain. Rather,

Throughout the text, the Babylonian conception of epilepsy as a supernatural disorder due to invasion of the body by evil demons or spirits is evident, sometimes with individual names for the spirits associated with particular seizure types. The first line states: ‘If epilepsy falls once upon a person [or falls many times] it is the result of possession by a demon or departed spirit.'

Nonetheless some of the clinical observations are spot on:

The following account of a unilateral focal motor seizure, which today we call ‘Jacksonian’, illustrates the accurate attention to clinical detail by Babylonian scholars: ‘If at the time of his possession, while he is sitting down, his (left) eye moves to the side, a lip puckers, saliva flows from his mouth, and his hand, leg and trunk on the left side jerk (or twitch) like a newly-slaughtered sheep - it is miqtu. If at the time of the possession he is consciously aware, the demon can be driven out; if at the time of the possession he is not so aware, the demon cannot be driven out’ Babylonian physicians were obviously aware that the early motor components of the episode can proceed to loss of consciousness, when it became harder to drive out the demon.

The Babylonians were also aware that epilepsy could kill, writing that

‘If an epilepsy demon falls many times upon him and on a given day he seven times pursues and possesses him, his life will be spared. If he should fall upon him eight times his life may not be spared’

Although there is in fact nothing special about the number seven, this might be an allusion to the fact that prolonged unremitting seizures (what we call status epilepticus) can be fatal. Seven was presumably chosen as the 'cut-off' because it was a well-known magical or sacred number. Another tablet describes what is now known as schizophrenia-like psychosis of epilepsy - when someone who suffers seizures develops paranoia and hallucinations...

‘...a demon then begins to inflict him with (ideas of) persecution so that he says - although no one will agree with him that it is so - that the finger of condemnation is being pointed at him behind his back and that god or goddess are angry with him; if he sees horrible, alarming, or immoral “visions” and is (consequently) in a constant state of fear; if he engages in periodic outbursts of anger against god or goddess, is obsessed with delusions of his own mind, evolves his own religion, and says - although (again) they will not allow it - that his family are hostile towards him and that god, king, his superiors and (city) elders treat him unjustly... and he has no desire for female relationships...’

Reynolds and Kinnier Wilson say that, as well as epilepsy and stroke, Babylonian sources describe irrational behavioral states that seem to correspond to our 'psychiatric' diseases, such as obsessive-compulsive disorder and depression. Yet, interestingly, the texts contain no account of the 'inner', subjective symptoms of these disorders, even though today, these are considered the essence of 'mental' illness. The Babylonians simply didn't write about

subjective thoughts or feelings, such as obsessional thoughts or ruminations in obsessive compulsive disorder, or suicidal thoughts or sadness in depression. These latter subjective phenomena only became a relatively modern field of description and enquiry in the 17th and 18th centuries, possibly under the influence of the Romantic movement. This raises interesting questions about the evolution of human self-awareness.