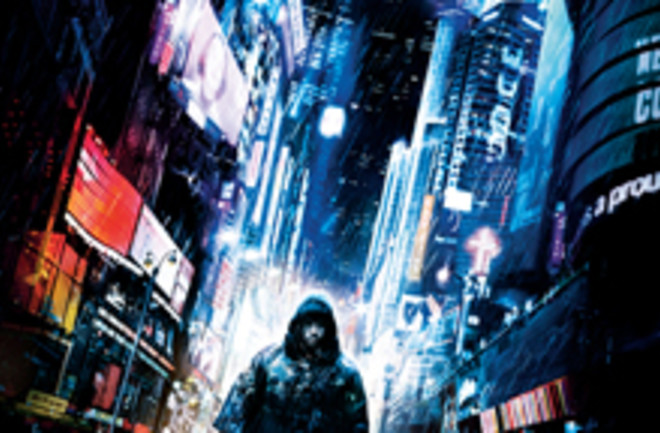 There’s a scene in the movie Babylon A.D., which opened Friday, where Mélanie Thierry’s character, Aurora, escapes from her guardians through a crowded post-apocalyptic marketplace and is suddenly confronted by two cloth-covered cages. She stares at the cages and as the camera zooms in, the audience realizes that something big is prowling about inside. The cage-porters whip the cloth off (Don’t ask why. This movie does not answer well to “Why?”) , and we see a pair of Siberian tigers pacing angrily and growling at the crowd. Aurora was raised in a convent, and the sight of the tigers awes her, not least because she knows (somehow) that tigers had been extinct for decades. The plot of the film is set in some indeterminate future, and it centers on Aurora’s journey from Russia to America in the company of Sister Rebeka (Michelle Yeoh as a badass nun) and Toorop, the hard hard-bitten, badass mercenary (Vin Diesel, who plays no other kind of mercenary, right Riddick fans?). Anyway, there’s the market place, there’s the tigers, there’s Aurora as Toorop and Sister Rebeka come up behind her. Toorop is not so impressed, later dismissing the beasts as “copies. Clones of clones. Fakes.” But why so dismissive, Toorop? Cut them, and do they not bleed? Stick your hard-bitten, badass finger near the bars, and will you not bleed? Of course you would. Cloned tigers are still tigers, after all, but for some reason, science fiction often depicts clones as somehow degraded from the original: The Michael Keaton film Multiplicity compares cloning to being photocopied, with each copy worse than the last, and Austin Powers’ spin on the concept is to render a Dr. Evil clone an eighth the size of the original. Until 2000, science agreed the genetic material of clones would degrade over successive generations. But in 2000, researchers cloned a mouse out six generations with no obvious ill effect, though the sixth generation mouse was the last of its line after its foster mom ate it. Then in 2007, scientists at Meiji University in Tokyo had a break through that allowed them to clone a pig to the fourth generation with no ill effects (that is to say, a clone of a clone of a clone of a clone). Increasingly it appears that the problem of cloning clones is more one of technology than of any inherent limit in the number of times DNA can be copied. But then, maybe what Toorop was really getting at is that the cloned tigers weren’t “real” in the sense of being wild animals, and there he has a point. Tigers in the real world are nearly extinct: loss of habitat and poaching are reducing the number of tigers to a point where if humanity is ever to return them to the wild, we will need to rely pretty heavily on a small number of individuals held in captivity. Let’s assume the zookeepers of Babylon A.D. had only saved the DNA from one male and one female Siberian Tiger. Two individuals would probably such a severe evolutionary bottleneck that even if these hypothetical zookeepers cloned 1,000 of the two individuals and tried to restart natural reproduction, the inbreeding would result in severe deformity and the species would not survive. But possibly they wouldn’t need too many more clones. The Northern elephant seal has been entirely repopulated from the last 30 individuals remaining in 1890. And cheetahs are famous for having survived some kind of genetic bottleneck about 10,000 years ago, and are now so closely related that they can swap skin grafts without rejection.