The shape of a newborn baby's brain can predict its later cognitive development, according to a new study from New York neuroscientists Marisa Spann and colleagues. Here's the paper: Morphological features of the neonatal brain support development of subsequent cognitive, language, and motor abilities Now, while the word 'phrenology' gets banded around a lot these days by people who don't like neuroscience, this study actually sort of fits that description - except instead of 'bumps on skulls' it was more 'bumps on brains'. The authors scanned 48 babies (within 6 weeks of birth) using MRI to obtain an image of brain structure; they then analyzed the shape of each brain using a deformation-based morphology approach. This revealed areas on each brain that were bigger or smaller than the average newborn brain: 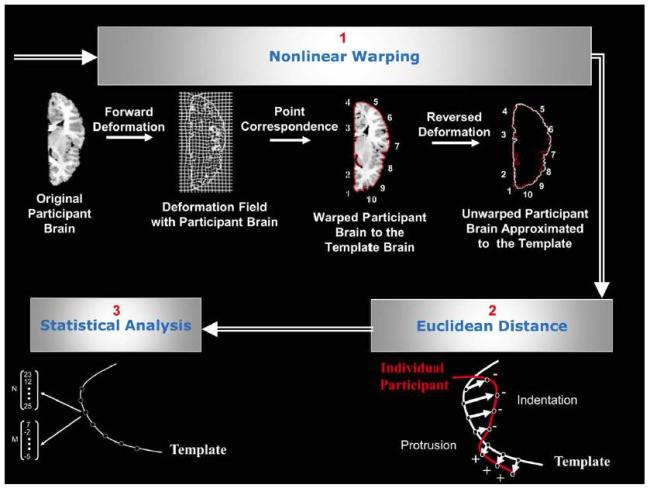 The outputs were a set of local 'indentations' and 'protrusions'... or, one might say, troughs and bumps? Anyway, after being scanned, the babies were followed up for two years and tested every 6 months to measure their developmental functioning in the domains of motor, language, and cognitive skills (using the Bayley-III scale.) There were significant correlations between brain shape and later development, however interestingly, most of these were negative correlations - that is, infants with a thinner cerebral cortex in each particular area did better: 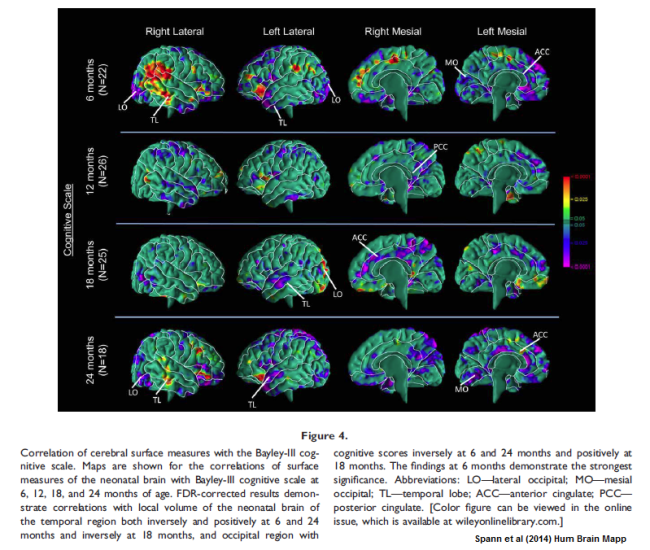 Here for example you can see results for the cognitive domain at ages 6, 12, 18 and 24 months. There are correlations in many areas, mostly negative (purple blobs), with the exception of some positive (yellow) correlations in the occipital cortex but these areas only predicted performance at 6 months. So it would seem that in general, 'less is more' for many parts of the newborn brain. Which is interesting because in a previous study, as the authors write,

At birth, head circumference as a proxy for brain volume was the strongest (positive) predictor of intelligence at 4 years (Gale et al 2006).

Spann et al don't seem to have analyzed whole-brain volume, but why would regional cortical thickness be a negative predictor of development? They suggest that it might be a slow-and-steady-wins-the-race type deal:

Slower or more protracted maturation of the brain or brain subregions, that are otherwise growing rapidly specifically in the neonatal period, may support the development and emergence of improved motor, language, and cognitive abilities in later infancy.

However... the sample size wasn't huge. Although they scanned 48 babies, only 37 had usable MRI data (for the other 11, quality was too poor). And of those, they were only able to get developmental assessments on n=33 at age 6 months, falling to n=18 by 24 months. A decently sized study at the outset, it had become a decidedly small one by the end. And I do worry (as I always seem tothese days) about head movement. It's hard enough to get adults to lie still in an MRI scanner. With babies it's all but impossible which is why the authors used the special motion-resistant T2 PROPELLER sequence. However, they still had to throw out about a quarter of their scans, perhaps for excessive motion. Could the scans they included have been degraded by movement, perhaps correlated with baby temperament and later behaviour, and could this have confounded the deformation-based morphology? Spann et al say that "the similarity transformation of an infant brain to a template is robust to the presence of noise in the imaging data" but it would have been nice to see some quantitative checks of that assumption.