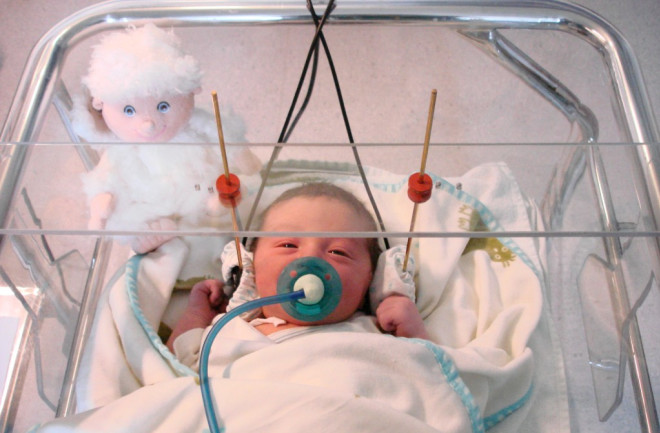 This Swedish newborn was one of the babies who participated in the study. Infants are known for their impressive ability to learn language, which most scientists say kicks in somewhere around the six-month mark. But a new study indicates that language recognition may begin even earlier, while the baby is still in the womb. Using a creative means of measurement, researchers found that babies could already recognize their mother tongue by the time they left their mothers' bodies. The researchers tested American and Swedish newborns between seven hours and three days old. Each baby was given a pacifier hooked up to a computer. When the baby sucked on the pacifier, it triggered the computer to produce a vowel sound---sometimes in English and sometimes in Swedish. The vowel sound was repeated until the baby stopped sucking. When the baby resumed sucking, a new vowel sound would start. The sucking was used as a metric to determine the babies' interest in each vowel sound. More interest meant more sucks, according to the study soon to be published in Acta Paediatrica. In both countries, babies sucked on the pacifier longer when they heard foreign vowel sounds as compared to those of their mom's native language. The researchers suggest that this is because the babies already recognize the vowels from their mothers and were keen to learn new ones. Hearing develops in a baby's brain at around the 30th week of pregnancy, which leaves the last 10 weeks of gestation for babies to put that newfound ability to work. Baby brains are quick to learn, so a better understanding of these mechanisms may help researchers figure out how to improve the learning process for the rest of us. Image courtesy of Christine Moon et al.