According to a large study just published in the Journal of Autism and Developmental Disorders, there's no correlation between brain anatomy and self-reported autistic traits. 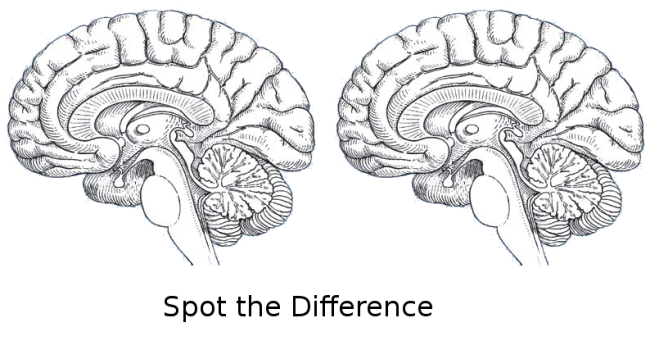 Dutch researchers P. Cedric M. P. Koolschijn and colleagues looked at two samples of young Dutch adults: an 'exploration' sample of 204, and a separate 'validation' group of 304 individuals. Most of the participants did not have autism. The researchers looked for associations between various aspects of brain structure and autistic traits, using the AQ questionnaire, a popular self-report measure. Autistic traits are personality or behavior features similar to (but generally milder than) autism symptoms. For example, the first item on the AQ is "I prefer to do things with others rather than on my own." If you disagree with that, you get a point. More points means more autistic traits. Koolschijn et al. used VBM, vertex-based cortical thickness analysis, and diffusion weighted imaging to explore different aspects of brain grey and white matter anatomy. However, although AQ scores were weakly correlated with the volume of a few brain areas in the exploration sample, none of these correlations were confirmed in the larger validation sample, suggesting that they were just false positives caused by the large number of multiple comparisons. The authors conclude that:

In this large exploration-validation study, we investigated if autistic traits in neurotypical adults were associated with a comprehensive series of structural brain indices. In contrast to our hypotheses, no evidence was found for any relationships between individual differences in behavior and brain anatomy.

Koolschijn et al. note that six previous published studies have looked for brain structural correlates of AQ scores in neurotypical people. Of those, four reported finding at least one significant association... but unfortunately, they all reported different (and even contradictory) things. The largest of these studies had 85 people, so the new study is far bigger. If the AQ isn't related to (currently measurable) differences in brain anatomy, why not? One possibility is that the AQ scale is just not a good measure of autistic traits. Koolschijn et al. note that it has shown "relatively low" correlations with non-self report measures of autism symptoms, such as the ADI and ADOS. But could it be that autism traits aren't associated with neuroanatomical differences because autism itself isn't? Six months ago, a large study of brain anatomy in people diagnosed with autism found virtually no differences from neurotypical controls. If most people with autism have entirely normal brain structure on the macroscopic scale, we might need to focus on the cellular level in order to understand the autistic brain.