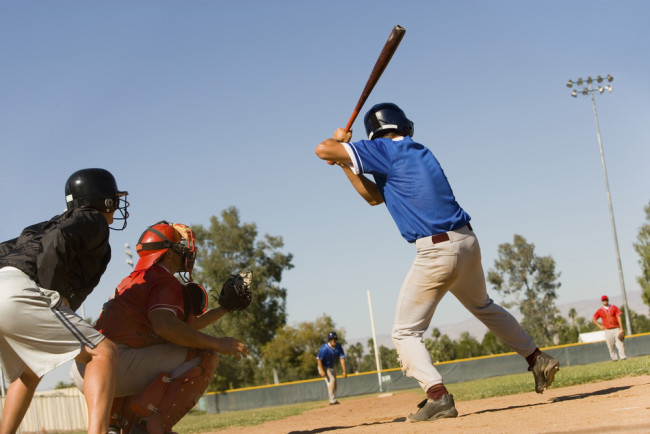 Eyesight is a vital part of sports, from golf to gymnastics. Now, a new study finds that athletes can improve their vision with practice, and that that improvement translates into better performance. “Though we’d been hoping for measurable benefits all along, we were still amazed to see such concrete performance improvements,” says UCR neuroscientist Aaron Seitz, who led the study. “And this demonstrates an important principle: Just as with physical exercise, we can measurably improve our mental fitness with the right training.”

The study was conducted on a group of 19 baseball players at the University of California, Riverside. The athletes’ vision was tested, and then they trained for 25 minutes a day, four days a week, with a specialized piece of software known as ULTIMEYES. 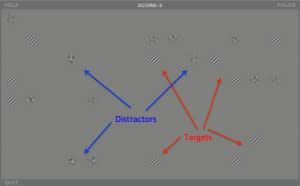 A screenshot from the ULTIMEYES game. Courtesy Aaron Seitz The software’s gameplay is a bit like that of popular iPad “tap” games such as Fruit Ninja: Players tap (or click) targets that vary in brightness and sharpness, and try to avoid tapping similar-looking decoys, through a series of increasingly difficult levels. Unlike the brightly colored cartoons in top-selling games, though, this game’s graphics are designed specifically to push players’ vision to its limits — they're small, low-contrast, deliberately blurry and otherwise difficult to see. After two months of regular training with this software, Seitz and his team re-tested the players’ vision, and noticed marked improvements: Some players’ visual acuity had improved from 20/20 to 20/15, some to 20/10, and a few all the way to 20/7.5 — meaning they could read a standard eye chart from nearly three times the average distance. Subjectively, the players also reported “seeing the ball much better,” “greater peripheral vision,” and other related improvements. And in the 2013 Big West Baseball season, UCR’s team showed higher-than-average improvement in batting averages and strikeouts — a slight advantage that the researchers estimate may have won them four or five of their 22 victories that season. The results

are published in Current Biology.

Of course, some baseball players already improve their vision by wearing contact lenses

or getting laser eye surgery — both of which are quicker and easier than months of visual training. But Seitz argues that this study is just a proof of concept for a technique with much broader implications. “We are actually working with people after LASIK and with contacts so that they can get benefits above and beyond those provided by improving the eyes' optics,” he says. LASIK surgery and contact lenses, he explains, both improve the optics of the eye, but patients have gotten additional boosts to acuity by training their brains' vision centers. “Before the contacts or surgery, the brain has gotten adapted to working with imperfections in the eye," Seitz says. "This software can help those peoples' visual brain areas optimize their own processing with regard to the eye improvements.” In unpublished results, Seitz's lab has found that ordinary people with 20/20 vision have shown improvement to 20/15 or 20/10 after a few months of training with the software — while some people who were beginning to need reading glasses have trained and found they no longer needed them. Seitz’s lab also recently received a federal grant to study the software's potential to treat vision problems such as amblyopia, age-related macular degeneration, and cataracts. “Ultimately,” he says, “we want the best optics and the best brain processing.”