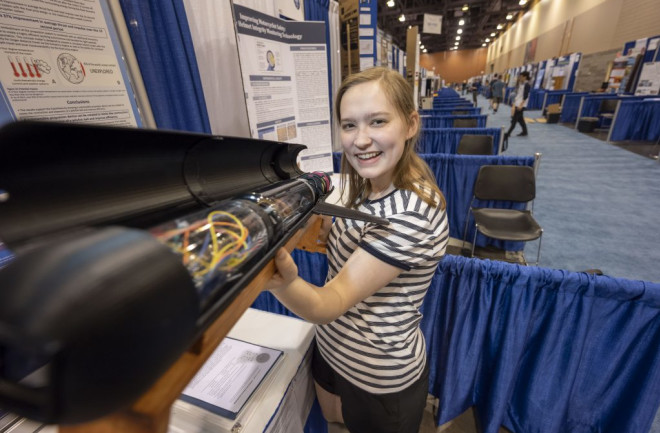 Seventeen-year-old Rachel Seevers waited nervously at the 2019 International Science and Engineering Fair (ISEF). The high school senior was about to demonstrate to the public a new kind of underwater propulsion system she’d created and tested in her parents’ basement. But no one came to talk to her. So, Seevers tried an experiment. She and a nearby male participant, who’d been getting lots of attention, switched spots, presenting each other’s research. Lo and behold, his project became much less popular with her standing in front of it, while hers suddenly attracted more interest.

But Seevers triumphed anyway. She went on to become the first-ever top winner from Kentucky, earning $50,000 to help her pay tuition at Harvard University in the fall.

Exception to the Rule

Girls like Seevers winning awards at science competitions are the exception to the rule, according to a study published last month in the Journal of Research on Science Teaching. Such competitions can be an important factor in stimulating interest in STEM fields, but women hold only 24 percent of STEM jobs in the United States. With women under-represented on the podium at these competitions, this trend could be exacerbating rather than helping narrow the science gender gap.

The two competitions could be sending different messages about what kind of person succeeds in STEM, the authors say. The data from the new study indicated male students win more awards and participate at higher rates than females in almost every Olympiad, but achievement and participation is much more equal in fairs.

Science competitions may be a microcosm of larger trends in society. Women are often nudged into fields that help others, while men are focused on attaining more lucrative positions, often in less interpersonal fields. This is reflected in science fairs and Olympiads, where girls choose more socially-relevant, biology projects and boys choose more abstract, physical science topics. It plays out later in people’s careers, too – women predominate in biology, men elsewhere. And these differences can matter in more than one way, because biology jobs pay less, contributing to the gendered pay gap.

These disparities aren’t surprising to Jacque Eccles, a behavioral scientist not involved in the study who researches career choices. She says studies suggest that boys are “more likely to be told it is important to be the best at one thing,” which matches more with the individual testing model of Olympiads than the community-driven nature of science fairs. But, she added, that doesn’t mean that it isn’t valuable for girls to strive for success in multiple activities.

Allison Jia, a senior at The Harker School in San Jose, California, agrees. She also won the $50,000 award at ISEF and has competed in several Olympiads. “[Olympiads] are definitely more male-leaning than what I’ve experienced in science fair,” Jia said.

Although Jia says she’s a very competitive person, she only participated in the Olympiads because she thought it would be fun. “The award isn’t the main motivation,” she said. Instead, she preferred science fairs because of the opportunity to make connections and have collaborative discussions about research.

That boys, but not girls, are lauded for competitiveness might explain why more boys succeed in the Olympiad format and go on to choose higher-paying, less people-focused jobs.

Overall, ISEF, the largest international science fair competition in the world, has roughly equal numbers of male and female participants. But it’s what topics each chooses to pursue that are telling. Girls often pick biology, while boys pick physics and math.

Biology is seen as being more people-focused. And Eccles says it isn’t lack of confidence keeping women from other sciences, it’s that they’re conditioned to prefer careers where they can help others.

For some people, like Jia, this can be a benefit. Whenever she felt discouraged researching Alzheimer’s proteins, she tried to remember “how many people it could help.”

But the same messages made engineering feel like more of a boys’ club for Seevers. She, too, is motivated by the thought of helping others with her work. That approach, though, is discouraged by some in the field. “I’ve always been critiqued to make [my presentations] less personal, with less emotion,” she says.

Researchers and science fair participants alike had recommendations for how to communicate that women contribute value in all areas of STEM.

The female winners at this year’s ISEF all called for more female STEM role models. AnaMaria Perez, who won the mathematics category at ISEF for her research on magic squares, was inspired to participate in science fair by Ana Humphrey, a fellow Latina and 2018’s winner of a different science fair. Perez and other winners said they’d like to see more female judges and keynote speakers.

To counteract stereotypes from TV shows like “The Big Bang Theory,” schools and communities can also provide more accurate information on what it means to do STEM. This could take the form of encouraging and supporting girls joining extracurricular STEM clubs and taking advanced science classes.

In the next couple of weeks, thousands of students from around the world will compete in the international Olympiads in biology, chemistry, physics and mathematics. Maybe this year, girls won’t have to do any social experiments to prove they deserve the gold medals.