Are There Any Benefits to Being an Empty Nester?

Becoming an empty nester can be tough on parents, but some research shows it's not all bad news. 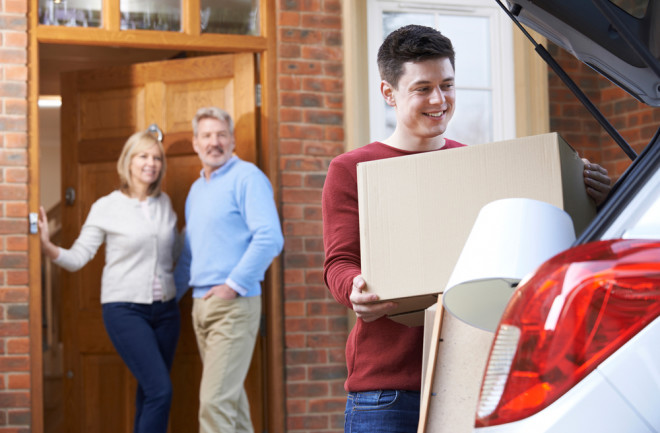 Six thousand, five hundred and twenty-one days: That’s how long I’d been living with my son when he left home for college. I’d spooned applesauce into his gummy mouth when he was a baby. I’d watched him wobble down the street on training wheels when he was a preschooler. I’d learned to rise on tiptoes to kiss his stubbled cheek when he was a teenager.

For nearly 18 years, I’d been there for the big moments and the daily nothings. I’d fretted about him and had fun with him. While he wasn’t my only focus in life, he took up a big front-and-center chunk.

We knew well in advance he’d be leaving the nest. My husband and I live in a small town. With aspirations to attend college, our son had no choice but to pack up after high school. On Labor Day weekend 2016, we drove four hours to deliver him to campus.

I expected to cry. Surprisingly, I didn’t. His dorm room looked clean. His roommate was friendly. The campus had an air of excitement. Although the final hug was long and hard, I was more giddy than tearful. Almost jealous. My son was starting an adventure. He’d do well.

But arriving home dampened the enthusiasm. My son’s spot at the dinner table was empty. His mattress was bare. It was bedtime and I hadn’t wished him good night: Should I text him or give him some space?

What would I do without my son?

The Weight of Absence

Though our son has all but moved out, my husband and I aren’t quite empty nesters yet. We still have a daughter at home, but she’s rapidly growing up. In a year, we expect she’ll take off, too.

Once she’s gone, physically my life will continue with two fewer bodies to navigate around. But after years of mothering, what should I expect psychologically? Will I be throwing a party, or falling apart?

One possibility is what’s called empty-nest syndrome, a term used since at least the 1980s. And it’s no walk in the park, according to Geneviève Bouchard, an expert in family psychology and professor at Canada’s Université de Moncton. “Empty-nest syndrome is a feeling of loneliness some parents may feel when their children leave home,” she tells me. “Its top effects are a sense of loss, stress and sadness.”

These issues particularly affect parents who didn’t have much chance to develop an identity outside of the home: those who cared for their kids full time or worked outside of the home only occasionally. Those who relied upon their children to give them purpose.

When their kids leave home, these parents experience a phenomenon called role loss. Without being full-time parents, they don’t know what other roles to play. They lose their sense of accomplishment, have fewer social activities and get lonely.

While my kids were growing up, I ranged from being a stay-at-home mom to having a full-time job. I definitely have my own interests. So although I miss my son, I’m happier for his gain than I am sad for my loss. Maybe when the final daughter-departing blow comes, empty-nest syndrome won’t be my fate.

There is hope. Bouchard says a number of studies have shown parents are more satisfied with their marriages as empty nesters than they were when they had children at home.

One 2013 paper in The Family Journal looked at older adults’ intimate relationships. In it, author Joshua Gold, a professor of counselor education at the University of South Carolina, quotes an empty nester who summed it up nicely: “You forget in 20 years [of parenting] what it is like to choose what you want to do every night,” this mother said. “We can cook what we like or go out to dinner if we feel like it. Our weekends are free to do what we want.”

This newfound freedom is the flip side of role loss. Children at home mean daily demands, time constraints and work-family conflicts. But once the kids are gone, parents’ roles change drastically.

In other words, maybe my post-kid life will be grand, especially since it will give me more time to spend with my husband.

For married couples whose children have flown — many of whom still have half their marriages left to go — an empty nest can make or break the bond. “Their toughest assignment will not be adjusting to missing children. It will be adjusting to the marriage,” Gold says.

Studies show there’s generally a U-shaped curve of marital satisfaction: It’s high in the initial years, drops in the middle when work and parenting sap time and energy, and then rises again later on.

If the marriage didn’t do a good job weathering the low point, the empty nest may signal divorce. On the other hand, shifting from mother/father to wife/husband can improve a couple’s relationship. In general, Bouchard explains, “Empty nesters are happier, at least in their marital lives, than parents with children at home.”

A 2013 study published in the Journal of Family Communication backs this up. Mary King, associate professor of communication studies at Bloomsburg University of Pennsylvania, and her co-author looked at 50 new empty-nest couples. “Many of the empty-nest parents in our study highlighted the benefits of a childless house,” says King.

These parents enjoyed advantages like more time spent together, fewer daily responsibilities, greater personal freedom, increased privacy, more time to talk without being interrupted and rekindled romance. Perhaps my husband and I, like them, will forge a new beginning.

So far, my main challenge has been to strike a new mothering balance. I know my son has to get things done at school: Do I nag him from afar, or do I let him take responsibility and potentially pay the consequences? How often do I contact him to make him feel supported but not smothered?

While studies don’t give me clear-cut answers, Bouchard says the empty-nest transition has surprisingly few effects on the parent-child relationship. By maintaining close ties with their kids, parents can help ensure their own well-being.

For a 2016 paper, published in The International Journal of Aging and Human Development, Bouchard and her co-author spoke with 102 empty-nest couples. Parents who said they’d seen or talked to their children within the last three days, and maintained regular contact, were more likely to report their own lives were close to their ideals and life conditions were excellent.

A parent’s contentment also depends on how the children are doing. “Even though there may be a sense of missing someone, the effects of the empty-nest stage depend, in part, on whether parents are satisfied by the way their children have turned out,” Bouchard tells me.

So it looks like we’ll be OK. My husband and I are proud of our son, and we’ve already established a regular Sunday-night phone call with him, in addition to the occasional text. When our daughter leaves, I’m sure we’ll do the same.

Heck, our kids’ absence may not even be for long. As Bouchard noted in a 2014 paper, about half of young adults return home for at least four months, again throwing home life into turmoil.

Maybe one day I won’t be wishing my kids were here. Instead, I’ll be hoping they take off again so I can keep rockin’ in my new-and-improved life.

[This article originally appeared in print as "Sure, I Miss You. But..."]