Are Only Humans Good Samaritans? 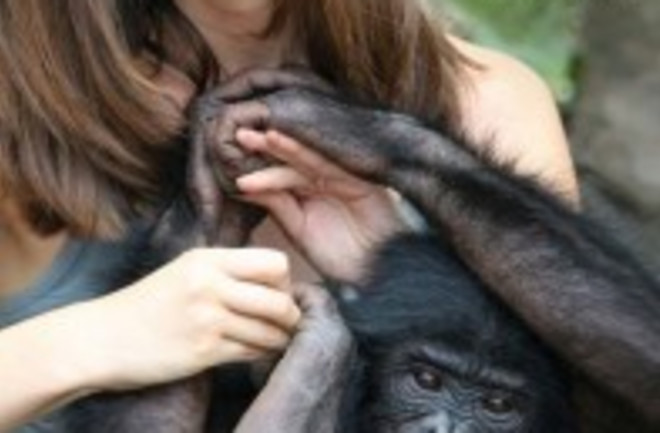 This is a guest post from Vanessa Woods, author of the new book, Bonobo Handshake. Vanessa is a Research Scientist in Evolutionary Anthropology at Duke University and studies the cognition of chimpanzees and bonobos in Congo.

The following is a modified excerpt from Bonobo Handshake.

In 1988, a crane operator called Joe Honner was digging out telegraph poles on Darrell Tree’s farm in South Australia. Joe’s three-year-old son was sitting with him in the cabin while Joe maneuvered the crane.

Suddenly, the crane swung into live telegraph wires. Over nineteen thousand volts of electricity shot through the broken wires into the crane, which, being made of metal, was a superb conductor. Joe jumped clear, but his son was stuck in the cabin. Joe rushed forward to get his son, but he was held back by the farmer, Darrell. The little boy was fine, Darrell said, as long as he didn’t move. The electricity wound around the crane, creating a perfect circuit, but the leather interior of the cabin was untouched. The boy was frightened and started to cry. As Darrell turned to get a rope to rescue him, Joe rushed forward. As soon as he touched the crane, he tapped into the circuit and electricity shot through his body, arcing him backward and rooting him to the spot.

Darrell charged Joe, pushing him clear. Both of them were knocked unconscious.When Darrell came to, he saw the boy lying curled on the ground beside the crane. Electricity was shooting through his head near his right ear. Darrell charged again and pulled the boy away from the crane. Again, the voltage knocked him unconscious. This time when he revived, Joe and his son were away from the crane, but neither of them was breathing. Darrell gave them both mouth-to-mouth and CPR. The boy lived, but Joe died before the ambulance arrived.

As for Darrell, the force of the electricity fused his spine and cracked his vertebrae. He had to have sixty-six stitches all over his body and the electric shock burned off his little toe.

Whatever you want to call it—heroism, altruism, temporary insanity—everyone from psychologists to economists claims that intentionally helping an unrelated individual at a cost to yourself is uniquely human. Despite Lassie, Flipper, and the other animal heroes, no one has solid evidence that any creature besides humans has altruistic tendencies, hence the word humanitarianism.

Even though not all of us would rush to take on nineteen thousand volts of electricity to save a child, most of us perform small frequent acts of altruism, like donating to charities or giving blood. Thousands of experiments have been designed to try to figure out where it comes from. What are the psychological and emotional mechanisms that allow us to put the welfare of someone else before our own?

The Dictator Game is one of the more famous experiments that prove our innate benevolence. Say you have $100. There is someone in the next room, a stranger you have never met before and whom you will never see. You can give them as much of your $100 as you want, or, like an evil dictator, you can keep all the money and give them nothing.

According to hard-bitten economic theory, you would give the other person zero. You don’t know them. You will never see them again. Why would you give them anything?

But economists have found over and over again that many people give as much as half. This kind of altruism has been found all over the world in all different cultures. It has even been found in eighteen-month-old babies. This, say the economists, is what makes us human. All of us are capable of these small acts of kindness that occasionally lead to the heroic acts of people like Darrell Tree.

The food sharing experiment is essentially playing the Dictator Game with bonobos, but instead of money, we use food.

Semendwa sits up straight, her eyes focused on a pile of food in the next room. She hasn’t eaten this morning, and the mound of food has papaya, cucumbers, pineapple, and her favorite—green apples. Semendwa loves green apples so much she will cut your heart out if she even suspects you are hiding them from her.

In the other room is Kikwit. He is also watching the apples, but he is behind a door that can only be opened by Semendwa. Brian opens Semendwa’s door. She comes into the room with the apples. Kikwit calls out.

Then, without even touching the apples, she goes to Kikwit’s one-way door, unlocks it, and lets him in.

Bingo. Semendwa has effectively given Kikwit half of her $100. She didn’t do it because she just enjoys his company—she could have eaten the food first, or at least the apple, before she let Kikwit in. She didn’t touch the food. They didn’t even have sex. She didn’t have a fetish for opening doors because on the other side of the room is another door that connects to an empty room. No. Before eating any of the food, Semendwa let in Kikwit so she could share with him.

Brian is ecstatic. It’s the strongest experimental evidence of altruism in a primate other than a human, and he has found it in bonobos. There is no way a chimp would do the same thing. Brian has already tested the Ngamba chimps in a similar experiment and the results were conclusive—if the chimps didn’t need help to get the food, they wouldn’t share it.

He tries the same experiment with Semendwa and Sake, a baby female in the nursery who only arrived a few years before. Sake and Semendwa are in separate groups. They are strangers. They have never met or touched. But still Sake lets Semendwa in.

Of course we call it food sharing and not altruism in the paper, because otherwise the economists would die of heart attacks. But I think it’s altruism. And I’m sticking to it.

*My new book Bonobo Handshake is out now. It’s available on Amazon, or through my website www.bonobohandshake.com.