Antidepressant sales are rising in most Western countries, and they have been for at least a decade. Recently, we learned that the proportion of Americans taking antidepressants in any given year nearly doubled from 1996 to 2005.

The situation has been thought to be similar in the UK. But a hot-off-the-press paper in the British Medical Journal reveals some surprising facts about the issue:

Explaining the rise in antidepressant prescribing.

In fact, the number of people being diagnosed with depression and prescribed antidepressants has actually fallen over time. The rate of diagnosed depression remained steady from 1993 to about 2001, and then fell markedly, by about a third, up to 2005. This trend was seen in both men and women, but there were age differences. In 18-30 year olds, there was a gradual increase in diagnoses before the decrease. (Note that these graphs show the number of people getting their first ever diagnosis of depression in each year.)

The likelihood of being given antidepressants for a diagnosis of depression stayed roughly constant, at about 75-80% across the years. However, the average duration of treatment increased over time - 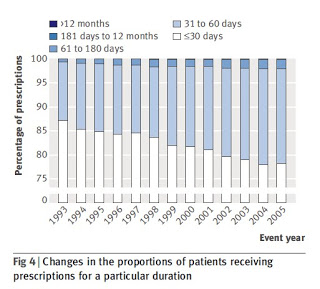 The change doesn't look like much, but remember that even a small change in the number of long-term users translates into a large effect on the total number of sales, because each long-term user takes a lot of pills. The authors conclude

Wow. I didn't see that coming, I'll admit. A lot of people, myself included, had assumed that rising antidepressant use was caused by people becoming more willing to seek treatment for depression. Or maybe that doctors were becoming more eager to prescribe drugs. Others believed that rates of clinical depression were rising.

There's no evidence for either of these theories in this British data-set. The recent fall in clinical depression diagnoses, following an increase in young people over the course of the 1990s, is especially surprising. This conflicts with the only British population survey of mental health, the APMS. The APMS found that rates of depression and mixed anxiety/depression increased between 1993 and 2000 in most age groups but least of all in the young, and little change 2000 to 2007. I trust this new data more, because population surveys almost certainly overestimate mental illness.

How does this result compare to elsewhere? In the USA, the average number of antidepressant prescriptions per patient per year rose from "5.60 in 1996 to 6.93 in 2005" according to a recent estimate. In this study yearly "prescriptions issued per patient increased from 2.8 in 1993 to 5.6 in 2004." So there's a major trans-Atlantic difference. In Britain, the length of use increased greatly, while in the US it only rose slightly, but from a higher baseline.

Finally, why has this happened? We can only speculate. Maybe doctors have become more keen on long-term treatment to prevent depressive relapse. Or maybe users have become more willing to take antidepressants long-term. Modern drugs generally have milder side effects than older ones, so this makes sense, although some people would say that this is just further proof that modern antidepressants are "addictive"...