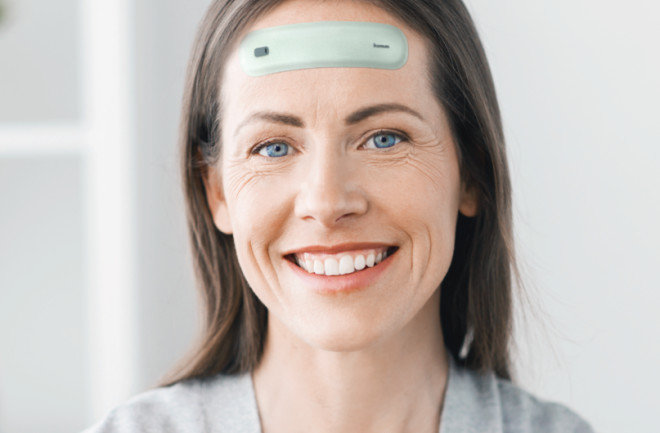 This week I came across a brain stimulation device called Humm that promises to improve your cognitive function and memory if you stick it to your forehead.

There are several broadly similar devices on the market, which make use of the principle of transcranial alternating current stimulation (tACS) – passing a current through the head (the front of the head, generally) in order to modulate brain activity.

In the case of Humm, the stimulation is applied at a frequency of 6 Hz which is meant to enhance theta waves in the prefrontal cortex. As the creators put it:

Working memory calls on a specific type of brainwave – slow-frequency, thrumming rhythms called theta waves. As we age, the strength of our theta waves naturally decreases and the brain’s overall rhythms become out of sync, resulting in a decline in working memory. Humm utilizes a proven method called tACS to resynchronize these rhythms and strengthen memory by gently stimulating the brain at a theta wave frequency of 6hz. tACS acts like the conductor of an orchestra that guides populations of neurons to fire simultaneously, allowing separate areas of the brain to communicate better.

What caught my eye about Humm is that they report doing a randomized, controlled study to show that their device really works and isn’t just a placebo. Here’s the write-up of the experiment.

I have to say that Humm’s study pleasantly surprised me. I was expecting it to be some kind of half-baked study that’s more marketing stunt than science. However, the study actually looks solid and I think it would pass peer-review, although it’s not published.

The Humm team randomly assigned n=36 volunteers to receive either active Humm stimulation or a sham (placebo) condition. The experimenters were also blinded to the condition. Before, during, and after the stimulation, participants completed a simple working memory task.

The active stimulation group performed better during and after stimulation than the control group (p=0.004 in both time-points.)

There were no group differences in expectations of benefit from Humm at baseline, or in perceived benefit experienced at the end of the experiment, which counts against a placebo explanation of the improvement.

The write-up even includes the raw data, and graphs the individual data-points, which is something that many academic papers still fail to do, so in that regard, Humm could be said to have gone beyond the gold standard.

Overall, this seems like a well designed experiment, except for one problem: it’s small. n=36 split between two groups is not much data; it’s not a tiny sample size, but it’s certainly not a large one, and I would want to see a much larger study before I would pay $99.00 to pre-order a pack of 12 Humms.

I consider it a priori unlikely that tACS stimulation could improve cognition. Humm hits the prefrontal cortex with 6 Hz current, which is supposed to enhance theta oscillations. But the frequency of theta oscillations varies across individuals; the theta range is usually said to be 4-7 Hz. Very few people would have a theta frequency of ‘exactly’ 6 Hz.

If my personal theta frequency is, let’s say, 5 Hz, then adding a 6 Hz stimulation would seem more likely to disrupt the normal theta function, rather than helping it.

Even supposing that my theta frequency was precisely 6 Hz, then Humm stimulation might be in phase with my theta waves, enhancing them, but it would be equally likely to be out of phase and suppress them. There is indeed evidence that individually-tailored theta tACS can disrupt working memory, although to be fair, plenty of other studies show a benefit. My point is that, a priori, there is no reason to assume a beneficial effect of this kind of stimulation.