Afraid of Needles? You May Want to Blame Your Genes

You might have your relatives to thank for some specific fears. 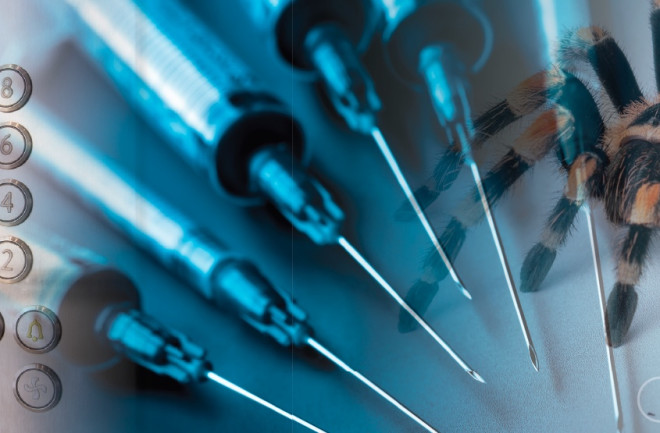 As the students calmly watched from their seats, I gripped the lectern, secretly fighting waves of panic, while vertigo made my vision swirl and my stomach queasy. Somehow, words still came out of my mouth — words that were part of my lecture on vaccinations. As a college health and science writing instructor, I discuss vaccines every semester in an attempt to debunk the fallacy that they cause autism. But despite my regular speeches on the topic, they inevitably trigger a panic attack like the one I was currently battling in the classroom.

See, vaccines involve needles. And since childhood, I’ve had needle phobia. Even thinking about them sends me spiraling into a private hell inside my mind, while my body gives way to symptoms like heart palpitations and even fainting.

Years of struggling with my extreme reactions had left me wondering: Where did my phobia come from? And could I ever get over it?

The Roots of Fear

Just like me, about 9 percent of adults in the U.S. lived with a specific phobia in the last year. That includes some of my family members: my needle-phobic sister and my mother, who is terrified of doctors, hospitals and medical exams. My mom’s fear goes hand in hand with her mistrust of medicine and faith in alternative treatments like herbs and reflexology. We’ve argued countless times over her advice to treat my ailments, like acid reflux, by gobbling up mustard seeds or applying pressure to the bottom of my foot.

Though I’ve managed to rebel against these beliefs, the familial fears have held on tight — so much that I’ve often pondered whether my phobia could actually be genetic.

Cameron Randall, a clinical psychologist at the University of Washington School of Dentistry in Seattle, had similar musings about a phobia’s roots. He’s researched the causes of odontophobia, or fear of the dentist, and in 2016 published a study of the condition in Community Dentistry and Oral Epidemiology. Randall and his team examined over 1,300 people who also had family members participating in the study. The volunteers took a survey to rate their dental fear and fear of pain. The researchers also took and analyzed samples of the participants’ DNA. Ultimately, they found that genes bore about 30 percent of the responsibility for odontophobia. (Meanwhile, the same study found that 34 percent of fear of pain could be tied to genetics.) The other 70 percent, the authors concluded, was likely linked to participants’ negative experiences, such as particularly painful drills. “It is really a case of both nature and nurture,” says Randall.

But the degree to which phobias can be inherited varies wildly, depending on the fear. In a 2013 analysis of previous research, published in the Journal of Anxiety Disorders, scientists sought to pin down how much genes can affect phobias. After a review of 10 relevant papers, the authors concluded that the influence of genetics can range between 0 and 71 percent. Fears of certain specific situations, like getting trapped in a stuck elevator, tend to be explained by related past events, not by genetics. Fears of blood, injury and injections, on the other hand, could be up to 71 percent heritable, driven more by genetics and less by experience.

The genetic roots of some phobias run particularly deep. For instance, trypophobia — the fear of clusters of circular objects like coffee bubbles or the holes in a sponge — may stem from an ancient aversion to infectious diseases and parasites, according to a 2017 study in Cognition and Emotion. Researchers exposed nearly 700 people to pictures portray-ing clusters of circular shapes; about half of the participants reported having trypophobia, while the rest reported being phobia-free. Some of the photos showed a skin rash or clusters of ticks, whereas others focused on clusters of items unrelated to disease or parasites, such as drilled holes in a brick wall. Both groups of people found the disease- and parasite-related clusters unpleasant. However, only those in the trypophobia group were also averse to the other batch of images.  Meanwhile, other research has looked at how nurture may shape certain fears. In a 2016 study in the journal Pain, the authors found that parents’ behavior during their young kids’ vaccinations affected the children’s likelihood of developing pre-vaccination fright. For instance, repeating, “It’s OK, it’s OK,” appeared to increase the youngsters’ distress. “What we are hypothesizing is that the more a parent says that, the more anxious they are, so they’re communicating their anxiety by saying it over and over again,” says senior study author Rebecca Pillai Riddell.

Although my early childhood days are a bit fuzzy, I do remember sensing my mom’s own fears when-ever we went to get my shots. This memory made me wonder if parental anxieties could ever spark phobias in the children. “Absolutely,” says Pillai Riddell, a clinical psychologist at York University in Ontario, Canada. “They call that vicarious conditioning. So watching a parent is one of the ways phobias are learned.”

While my occasional fainting bouts are ultimately a minor nuisance, other phobias can wreak havoc on health, work and relationships. For example, some people refuse to undergo life-saving treatments because of their fear of needles. Odontophobics who avoid the dentist for years often end up collecting cavities. Those afraid of flying may miss key business meetings and family gatherings in faraway destinations.

That’s why overcoming these fears is so important, and it is possible. Exposure therapy, where patients confront their triggers gradually, tends to yield good results. In fact, Randall says, it’s the most effective type of treatment for many specific phobias, such as a fear of elevators. Researchers have also seen success tackling phobias through less direct means. In a 2018 study published in The Lancet, treatment with virtual reality scenarios that mimicked various elevations helped alleviate participants’ fear of heights. And a study published in 2017 in Depression & Anxiety found that in people who had odontophobia, cardio exercise before a dental procedure helped reduce their anxiety.

Still, I wondered if there was an easier way for me to cope with my phobia symptoms. Some of the research I came across suggested that simple distraction might do the trick. When I asked Randall about it, he agreed, calling it a viable strategy.

So, at a recent blood test, I put this approach into practice. After reluctantly dragging my feet to the doctor’s office, I immediately confessed my phobia to the nurse. We then joined forces to trick the enemy. I swiped through the photos of my beloved cats on my phone while the nurse distracted me with questions about my three feline “daughters.”

I still moaned and groaned, panicking as usual. But this time I didn’t pass out. Keeping my mind off the fear helped my body deal with the situation. While I may not have fully defeated my phobia, at least I’ve tamed it.