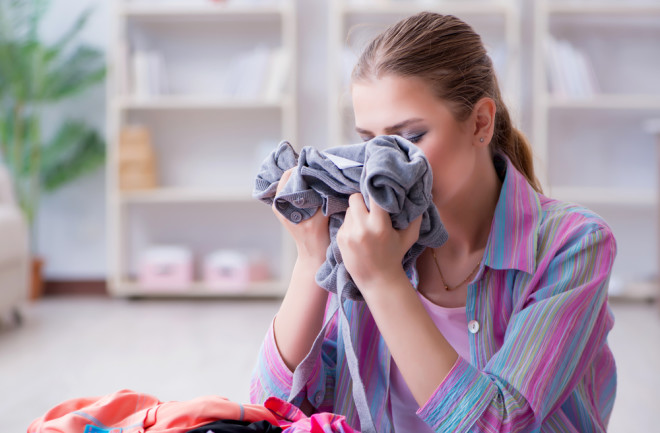 A woman enjoys a stress-reducing whiff of worn shirt. (Credit: Shutterstock) The human sense of smell is perhaps our most underrated ability. The power of scent may not get the credit it deserves because we experience it differently than our other senses. Rather than proceeding directly to the thalamus—the seat of consciousness—like other sensory signals, scent information travels to parts of the brain associated with emotions and memory. Therefore, much of the information we receive through our noses is experienced subconsciously. Consider this: It has recently been shown that the olfactory system can detect over 1 trillion different odors, which is orders of magnitude higher than previous estimates of roughly 10,000. Sniffing our palms seconds after a handshake can give us insights about another person’s emotional state. Our vigilance perks up when we smell a shirt worn by a stressed-out person, or a smile may cross our face when we catch the whiff of a person who just watched a funny video. We’re under the spell of odors; even if we aren’t fully aware of it. And in a recent demonstration of the power of scent, researchers from the University of British Columbia showed that sniffing a romantic partner’s shirt can lower levels of the stress hormone, cortisol. Researchers recruited 96 opposite-sex couples for their study, and men were given a shirt to wear for 24 hours. They were told to avoid smoking, colognes, deodorant, eating spicy foods—anything that could interfere with their natural scent. Then, the T-shirts were frozen to preserve their unique olfactory aura. Women were then given one of three T-shirts to sniff: their lover’s shirt, a stranger’s shirt or one that had never been worn. Each woman participated in a stress-inducing test that involved a fake job interview and a math test. They also answered questions about their stress levels and provided a saliva sample to monitor their cortisol levels. Women who had unknowingly sniffed their partner’s scent had lower levels of cortisol throughout the test than women who sniffed a stranger’s shirt. Women who sniffed their partner’s shirt and correctly identified it as their partner’s had even lower cortisol counts. “From a young age, humans fear strangers, especially strange males, so it is possible that a strange male scent triggers the ‘fight or flight’ response that leads to elevated cortisol,” said Marlise Hofer, the study’s lead author. “This could happen without us being fully aware of it.” Women were chosen as the "smellers" because researchers say they have a better sense of smell than men. Of course, future research might flip the tables and see if guys experience the same stress-reducing effects as gals. Hofer and colleagues published their findings in the Journal of Personality and Social Psychology. So, when times get tough, or your beloved partner is an ocean away, you might be well served by reaching into the dirty laundry pile.