A political animal in the genes

Trends in Genetics has a review article, The genetics of politics: discovery, challenges, and progress. The main reason I point to these sorts of papers isn't that I think they're revolutionary. Usually they aren't. Rather, the public domain has totally forgotten about this domain of study. Most of the informed and high-toned discussion presumes that almost everything of worthy note is socially constructed. If not, then the counterpoint is a crude caricature of genetic determinism which is refutable in a blink of the eye. It's as if someone was commissioned to paint R. Daneel Olivaw, and ended up using crayon to sketch out the Frankenstein monster. For example, in sex differences the public debate veers between evolutionary psychological Leave It To Beaver, pre-scientific cultural traditionalism, and de facto Blank Slatism. On the one hand you have to deal with people who use "scare quotes" around the "highly speculative" "hypothesis" that males have a greater tendency toward inter-personal physical aggression than females (including in the comments of this blog, so spare with lectures about how this is a marginal perspective; I'm pretty sure I talk to people about behavior genetics a lot more than you do, though if not I'd like to hear from you!). Set against this you have an elevation of a particular specific and historically contingent nuclear family structure in the post-World War II West as normative by the laws of biology. Never mind that you need to leave the hearth to gather, and that someone must have been minding the farm when citizen soldiers were away at war.

, rather than being a consequence of the natural laws of society. And just because something is socially constructed does not mean that it is not good or worth defending. And just because you believe that something is natural does not mean that you think that one should never rein in one's natural impulses. Is and ought are not the same, and they do have relationships, but they're complex and need to be teased apart precisely. As it is most discussions deal in rhetorical preening and misrepresentation of one's interlocutors. But before we can have intelligent discussions about these topics we actually need to revisit robust facts (I no longer believe that it is currently possible to have informed and civil discussions on these issues in public, though it is generally possible in private). In this area the Trends in Genetics review does have one weakness: the authors note that critics of behavior genetics presume that they are attacking a Mendelian genetic architecture (e.g., "the god gene"), when it fact behavior genetic traits are polygenic and highly distributed across the genome. And yet they themselves seem to have in mind a very narrow range of architectures when it comes to ideology being polygenic, as they cap the article with a laundry list of genetic loci. In any case, here's the chart (I've reworked it in terms of dimensions) that I want readers to peruse. Notice the disjunction between heritability of political ideology and political party. What the results here mean is that if you adopt children they are likely to follow your own political party orientation, but not necessarily your political ideology. 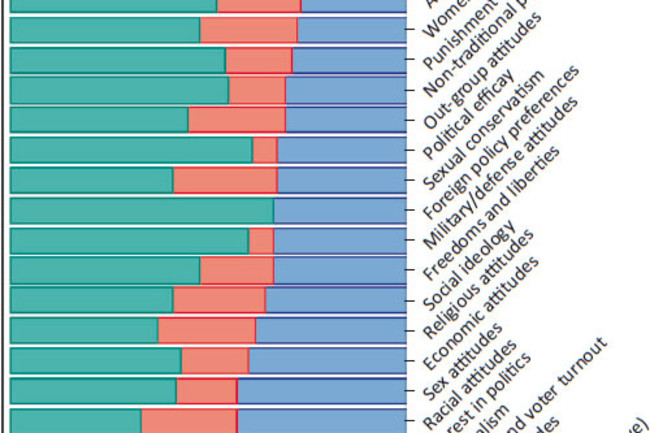 There is one interesting aspect of the paper which I had not been aware of:

One important finding that emerged from extended pedigree studies is that long-term mates correlate more highly on political ideologies (0.65–0.71) than on almost any other clinical, behavioral, or psychological trait...Spousal similarity was not due to convergence or social homogamy...Once assortative mating was accounted for, the genetic similarity for political traits between DZ twins increased; the effect being that less genetic variation between twin types accounted for more of the overall phenotypic difference. This recognition led to the conclusion that possibly the most important social influence on a child’s ideologies is the parent’s choice of mate, which affects a whole repertoire of downstream effects, including genetic transmission, familial environment, and the range of person-specific environments that offspring experience.

Here's a personal anecdote. My parents are Democrats, and always have been. They may be socially conservative, but they never really abandoned their faith in the 1970s Third World socialism which they left 30 years ago. And yet I have strange instinctive sympathies toward paleolibertarianism (I am not a paleolibertarian because in the domain of politics I make it a policy not to extrapolate from my peculiar intuitions to humans as a whole). Interestingly, I have a sibling 15 years younger than myself who has the exact same predisposition! Mind you, this is an individual who I had little contact with growing up because I was an adult out of the house during their formative years. One thing about being similar to someone in terms of aptitudes and orientations, and yet half a generation older, is that you can dissuade them from compelling, but ultimately fruitless endeavors. A fixation on the minutiae of politics is exactly one of those things.